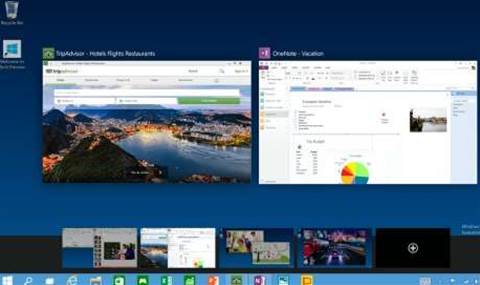 Microsoft threw the IT industry a curveball Tuesday by revealing that the next version of Windows will be called Windows 10 instead of Windows 9, as had been speculated.

Windows 10, codenamed 'Threshold,' has been built from the ground up for productivity and reflects Microsoft's growing focus on mobility and cloud computing, Terry Myerson, executive vice president of Microsoft's Operating Systems group, said during a press conference in downtown San Francisco.

While there's some new technology, Windows 10 is primarily about winning back enterprises that avoided Windows 8 like the plague.

Many enterprise customers felt Microsoft was force-feeding them a mobile-optimised OS that didn't work well on desktops. Other enterprises have balked at the costs of retraining their users to learn the Windows 8 touch-powered interface.

But Windows 10 is designed to run on all kinds of computing devices -- from tiny sensors in the Internet of Things, desktops and tablets, servers running massive corporate data centers and eventually even the Azure cloud, Myerson said.

Most importantly, Windows 10 will adjust and scale to provide a user experience that's optimised for each type of device, Myerson said.

"Windows 10 is the first step in a whole bunch of new experiences that consumers and enterprises are demanding," he said. "We're not talking about one UI to rule them all, but one family and a tailored experience for each device."

Windows 10 will be available soon after Microsoft's Build conference next year and Myerson said it is "reasonable" to expect Windows 10 to launch in mid-2015. It is unclear whether it'll be a free upgrade for Windows 8 users, as some reports have suggested.

Windows 10 will be compatible with all the apps, tools and management systems enterprises are using today, Myerson said. This means being able to manage PCs, smartphones, tablets and sensor devices through a single management interface, he said.

More of the big changes coming in Windows 10

One of the biggest changes in Windows 10 is that touch-optimised "modern" apps run in a window on the desktop, enabling users to run them right next to their desktop apps, Joe Belfiore, corporate vice president of the Operating Systems Group, said at the event.

That addresses one of the biggest beefs customers had with Windows 8, which was that some disliked being taken to different environments for modern and desktop apps.

"We don't want that duality" in Windows 10, Belfiore said.

Windows 10 also includes stronger security for corporate data and the ability for enterprises to tailor their Windows app store experience to their own needs, Belfiore said. While using Windows 8 was like driving a Prius, Windows 10 is more akin to a Tesla, he quipped.

Belfiore also showed off a new Windows 10 feature called Continuum which allows 2-in-1 devices to change between tablet and desktop mode on the fly depending on how they're being used.

To give enterprises lots of time to evaluate Windows 10, Microsoft is launching something called the Windows Insider program on Wednesday. Customers will get a technical preview build of Windows 10 for laptops and desktops, with a build for servers and management tools coming "soon after," Myerson said.

Microsoft is sharing more information about Windows 10 at an earlier stage than it has ever done with a Windows release. In a marked contrast to the information lockdown that preceded the Windows 8 launch, Microsoft will use user feedback to put the finishing touches on Windows 10.

"Our intent is simple: We believe with your feedback, we can build a product that all customers will love. Windows 10 will be the most collaborative OS project ever," Myerson said.

Mitigate tech risk in your business
By Kevin McLaughlin
Oct 1 2014
7:25AM