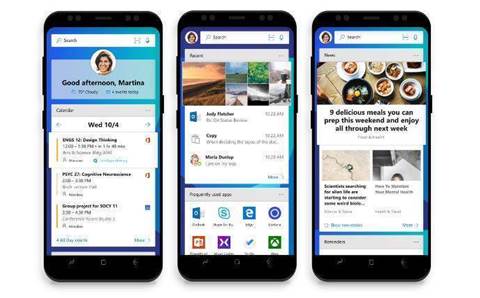 Microsoft is bringing its Edge browser to Apple iOS and Android devices, starting with a public preview.
The decision to bring the browser, which was launched with Windows 10, onto third-party mobile operating systems follows Microsoft's continued move away from its own mobile platform. This week it was revealed that one of the few Windows Phone hardware OEMs, HP, would discontinue sales and support for its Elite X3 Windows 10 smartphone by the end of 2019.
Edge on iOS and Android allows users to sync browsing across PC and mobile, said Joe Belfiore, corporate vice president, Windows and Devices, in a blog post. He said that "what makes Microsoft Edge really stand out is the ability to continue on your PC, which enables you to immediately open the page you’re looking at right on your PC—or save it to work on later".
This 'Continue on PC' functionality will be part of the Windows 10 Fall Creators Update, due 17 October.
Microsoft Edge for iOS and Android will launch initially only in US-English, "but we’ll ramp to other countries/languages as we expand the preview", Belfiore said.
"And some features – like roaming passwords and support for iPads/Android tablets – aren’t available at preview launch but will come in the future."
Microsoft hopes bringing Edge to the world's two leading smartphone ecosystems will increase the browser's lowly market share. According to Net Marketshare, Edge had just over 5 percent share in September, versus almost 60 percent from market leader Google Chrome and more than 14 percent for Internet Explorer.
The vendor has also unveiled Microsoft Launched for Android, which allows customisation of the “launcher” that’s displayed when a user pushes the phone’s home button. "We think it’s the most beautiful (based on Fluent design), customisable, powerful launcher available. With Microsoft Launcher, your recent photos, documents and more can all continue on PC as well."
"Microsoft Launcher represents the 'graduation' of the 4.6-star rated 'Arrow Launcher' project that was developed in our Garage – we’re making a big update to Arrow and changing its name. Everyone on the Arrow Launcher beta will automatically get the Microsoft Launcher today, and any other Android users can join the preview of Microsoft Launcher beginning today as well," Belfiore said.
Got a news tip for our journalists? Share it with us anonymously here.

Grab the MSP security opportunity
By Steven Kiernan
Oct 6 2017
7:09AM