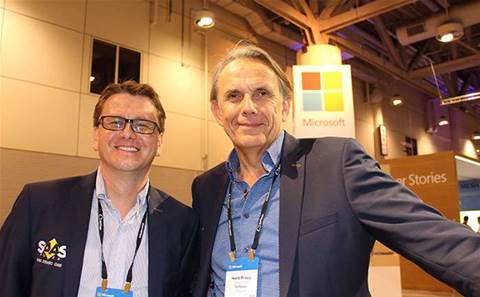 Microsoft Dynamics 365, launched earlier this month, will be pitched to customers from microbusinesses all the way up to enterprises.

That opens up a raft of competitors - from Dynamics' traditional enterprise competitors Oracle and SAP, to cloud rival Salesforce, down to midmarket product NetSuite, and even small business accounting packages, Xero and MYOB.

Microsoft could also compete with its own hosting partners that offer ERP and CRM from their data centres.

Dynamics 365 was a central focus at this year's Worldwide Partner Conference in Toronto, with a special place in the opening keynote and many sessions devoted to the solutions.

The software-as-a-service is set to be released in the northern autumn. Microsoft has been coy on detail, but it will come in at least two flavours, a Business edition and an Enterprise edition.

Simon Davies, vice president of Microsoft business solutions for Asia Pacific, said that Dynamics CRM would be an alternative to "NetSuite but even smaller… right the way down the smallest organisations. It was designed to bring all of the components you need, whether that's order-taking, inventory management... those kind of tools that you need as a small business, and bring them together into one modern interface that make it seamless for a small business".

Microsoft's growing strength in CRM has seen Dynamics join Salesforce as the only other leader in Gartner's Magic Quadrant.

The maturing led the founders of leading Salesforce partner Cloud Sherpas, which they sold to Accenture in 2015, to relaunch as a Microsoft partner. CRN sat down with the two directors of Barhead Solutions – John Orrock and Ken Struthers – at Microsoft's Worldwide Partner Conference in Toronto, where both of them were WPC first-timers.

"This conference has opened my eyes a bit broader. I've realised that people might buy Salesforce as a strategic CRM but they buy Microsoft as strategic decision," Barhead general manager Ken Struthers told CRN.

Barhead, which is headquartered in the Philippines with an office in Sydney, recently sealed a half million-dollar Microsoft deal.

Microsoft wants its reseller and managed services partners to get into CRM. One Australian partner already on this trajectory is Sydney-based Xcentral, which has expanded into the category. "We have added CRM as a practice within Xcentral to complement the other productivity solutions that we offer," said Angus Mansfield, sales director of Xcentral.

"We had to find the right person to lead the CRM practice with extensive Microsoft CRM experience and built out the offering from there. The first wins came early and were reasonably sized and we continue to have increasing interest in CRM Online," added Mansfield.

But as with many of Microsoft's recent launches, it could put the vendor into competition with partners. Just as Office 365 took business away from hosting providers, and the Surface 2-in-1 device competes with Microsoft's OEM partners, now Dynamics 365 will go head-to-head with companies that provide hosted CRM and ERP services

SaaSplaza specialises in migrating on-premises Dynamics instances into hosted environments. The company, which is headquartered in the Netherlands with an Australian office in Sydney, was recently appointed a two-tier Cloud Solution Provider (CSP) to help drive consumption of Microsoft Azure in the Australian market.

Herb Prooy, APAC director of SaaSplaza, predicts Dynamics 365 will be a success, though it is not an opportunity for his company and he reckons there will always be space for the high-touch migration services SaaSplaza provides.

"Microsoft is a product company and they want to sell as many licences as possible. Over the past couple years, you have seen a lot of attempts where they have tried to encouraged Dynamics partner to sell more licenses. That was not really working," Prooy told CRN at the conference.

"What they are trying to do now is leveraging the success of Office 365 to cross-sell CRM Online and NAV in another channel as a standardised product – a cookie-cutter approach. They start selling Dynamics 365 not as an ERP but as a rich container of a lot of functionality that you can use or not. It is sold like Office 365 as a standard solution."

Rather than be concerned about competition, Plooy is optimistic that Dynamics 365 will raise the profile of cloud-based ERP and CRM deployments. "We like that, it helps with the adoption of the cloud for running business-critical applications.

"I think a lot of companies will take it because it is easy and convenient without any risks, They can switch any moment, so I think there will be a market for that," said Prooy.

"But there will also always be a market for single-tenant implementation. ERP implementations where a lot of customisation and integration with other applications and data sources are required, which will not work with Dynamics 365. This cookie-cutter approach is addressing a different market than what current Dynamics partners are addressing. They [Microsoft] are trying to open up this huge space of millions of SMBs that don’t have high requirements."

Steven Kiernan was a guest of Microsoft at Worldwide Partner Conference