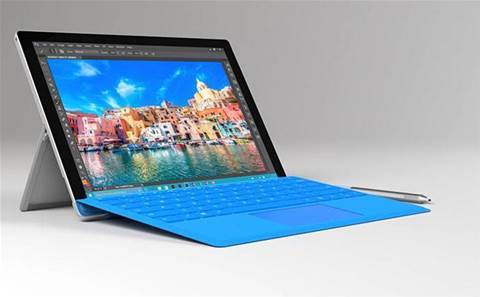 While it's important not to read too much into corporate blogs blowing company trumpets, it's fair to say that Microsoft is in buoyant mood over the public reaction it's getting to its Surface range of laptops and tablets.

“November was our best month ever for consumer Surface sales,” writes Brian Hall, CVP at Microsoft Devices Marketing on the company's blog. “The Best Buy-exclusive Surface bundle sold out on the first day… In the UK, we had the best single week for Surface ever and in Germany the Surface Pen became the best seller in PC Accessories on Amazon.com for over 12 hours.”

While this is high on cherry picked global anecdotes and low on raw numbers (10 sales would be the best month ever if you only ever saw nine previously), there's a good chance this will be an impressive leap. Two months ago, Microsoft reported Surface revenues came in at $926 million, up 38 percent year-on-year.

But the biggest sign that Microsoft is in a cocky mood is the dig they have at Apple further down the page. Under the subheading of “More people are switching from Macs to Surface than ever before,” Hall writes that “the combination of excitement for the innovation of Surface coupled with the disappointment of the new MacBook Pro – especially among professionals – is leading more and more people to make the switch to Surface.”

The evidence for this comes from the best month ever for their MacBook trade-in programme, although to me that's a logical leap too far: I mean, if you have the best sales month ever, then you would expect trade-in rates to be higher as part of the overall picture, unless it was massively skewed in such a way. Microsoft doesn't offer any indication that it was, so I think we can chalk that one up to corporate trash talk.

Although Apple is generally pretty bullish about the new MacBook line's performance to date (“so far our online store has had more orders for the new MacBook Pro than any other pro notebook before,” Philip Schiller told The Independent last month), there could be trouble ahead.

The editor of PC Pro in the UK, Ian Betteridge, recently wrote that the huge price inflation seen on Apple laptops this year might have killed the company in the enterprise space. “The cheapest MacBook Pro was £999, and now it's £1,249 – and you can add in the cost of obligatory dongles too,” he wrote. “If you had a budget of £50,000, yesterday you could equip 67 employees with Macs. Today, that's 50. One CIO I've spoken to told me that this may have cost Apple £100,000 of business.”

Of course, Hall's blog post was just about consumer sales. It will be interesting to see how enterprise sales are doing in a few months time, and whether Ian's fears for the company are founded.