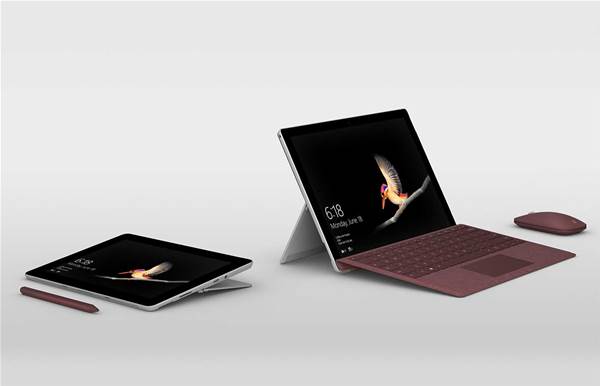 Microsoft has officially launched the 10-inch Surface Go into 21 markets around the world, following weeks of leaks and speculation around its new device.

The smaller device will also be the cheapest Surface at $599, compared to the Surface Pro, which starts at $1199.

It packs a PixelSense Display with a 1800×1200 resolution, maintaining its 3:2 aspect ratio used on the other Surface devices. The Surface Pro meanwhile has a 12.3-inch screen with a 2736x1824 resolution.

The wifi-only model will be available for preorders starting tomorrow in Australia, New Zealand and 19 other countries in North America and Europe, and will hit shelves starting 2 August. An LTE model is also set to arrive later this year.

Preorders in Japan, Singapore, Korea, Taiwan, Malaysia, Thailand, Hong Kong, and in China will be available in the coming weeks, with more markets to follow.

Inside, the Surface Go is powered by a 7th generation dual-core Intel Pentium Gold processor and a 64GB eMMC solid-state drive in a fanless design. Microsoft claims battery life is up to 9 hours.

It also comes with 8 megapixel rear and 5-megapixel front cameras with Windows Hello to enable signing in using face recognition. A new Type Cover will be available for sale separately, although the full-sized covers are also compatible.

The microSD card reader was retained from other Surface products, and also has a 3.5mm headset jack and a USB type C port.