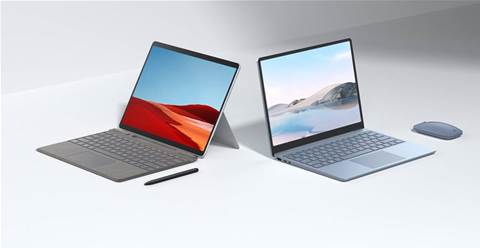 Microsoft is expanding its Surface lineup with the introduction of a new laptop aimed at portability and affordability, the Surface Laptop Go.

The company also unveiled the first update to the Surface Pro X, which was launched a year ago, focused on performance improvements.

The Surface Laptop Go also features a smaller display at 12.4 inches and a lower weight of 2.45 pounds.

Other key specs include 10th-generation Intel Core processors, up to 13 hours of battery life, both USB-C and USB-A ports, a combined fingerprint sign-in/power button and an HD webcam.

Notably, even with the small size of the Surface Laptop Go, the keyboard is still full-size and offers a solid 1.3mm of key travel, according to Microsoft.

As for the Surface Pro X—which Microsoft has touted as an overhauled version of the popular 2-in-1 Surface Pro tablet series—the company unveiled just a few updates on Thursday.

Those include a new edition of Microsoft’s custom Arm-based processor for improved performance. The new processor, the SQ2, is “the fastest processor in its class,” Microsoft said in a blog post.

Additional Surface Pro X updates include the expansion of battery life to 15 hours from 13 hours previously, and a new Platinum color option.

The Surface Pro X continues to offer the features that distinguish it from the standard Surface Pro line—such as the larger display (at 13 inches), thinner form factor (at 0.28 of an inch thick) and storage of the digital stylus inside the keyboard itself.

The new Surface Pro X will have a starting price of $1699.

Both the Surface Laptop Go and new Surface Pro X can be preordered now, with shipping to begin on 13 October.

Eliminating departmental friction within MSPs
By Kyle Alspach
Oct 2 2020
6:55AM