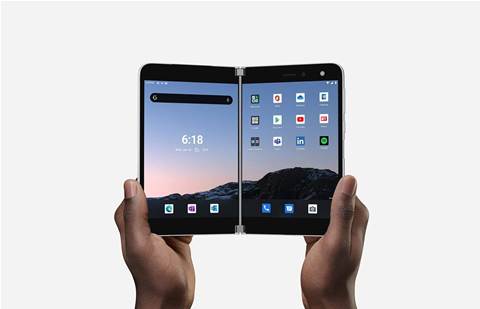 Microsoft Wednesday debuted its ambitious entrance into the foldable device market with the Surface Duo.

The dual-screen device runs Android, offers LTE connectivity and enables phone calls and texting—even if Microsoft is continuing to shy away from referring to the Surface Duo as a phone.

Instead, Microsoft sees an “opportunity to create something new with Surface Duo—not to reinvent the phone, but to inspire people to rethink how they want to use the device in their pocket,” said Panos Panay, chief product officer for Windows + Devices at Microsoft, in a blog post.

What follows are six key things to know about Microsoft’s Surface Duo.

The Surface Duo features dual displays of 5.6 inches each that are connected by a 360-degree hinge (that’s 1 inch bigger per display than Samsung’s Galaxy Fold). When unfolded, the displays offer a total of 8.1 inches of screen space diagonally.

The device offers vibrant AMOLED displays--Microsoft’s PixelSense Fusion technology—which has resolution of 2700 x 1800 when folded open. The device also measures just 0.19 of an inch thick when unfolded, meaning that it “opens into the thinnest mobile device on the market,” Panay said.

The two displays on the Surface Duo can be used individually or can come together as a single display, Microsoft said.

“Join a Microsoft Teams meeting and see participants on one screen while you present your PowerPoint slides on another. Open the Amazon Kindle app and read a book like a book. Position Surface Duo’s screen like a tent and watch a video hands-free. Use Surface Duo in Compose mode to quickly respond to an email, or tilt it into portrait for a more immersive way to scroll through web pages or photos,” Panay said.

Panay outlined several innovations that enabled Microsoft to develop the Surface Duo’s key capabilities around using either as a single- or dual-screen device.

Duo leverages a “custom pixel stack and each set of panels undergo extensive color and luminance calibration,” he said. “We developed new manufacturing processes to actively align pixels across screens. The proprietary digitizer algorithms even consider when you are crossing the seam with your finger, making it feel like it’s one fluid screen.”

Meanwhile, for the 360-degree hinge, custom-designed cables are used to tie the two displays together, Panay said.

“We designed a completely new dual-system architecture to deliver optimal performance and battery life within the thinnest, lightest design possible,” he said.

Microsoft has envisioned the Surface Duo less as an entertainment device and more as a productivity tool.

“We designed Surface Duo for people who want to get more done with the device in their pocket,” Panay said. “We know dual-screen devices not only help people complete complex tasks faster but also require less cognitive effort, making them universally preferred for productivity tasks.”

Along with being able to split up apps between the two screens, Microsoft says it has optimized its ubiquitous productivity apps for the Surface Duo. Microsoft apps optimized for the device’s dual screens include Outlook, Teams, Edge, OneDrive and OneNote.

Using the Your Phone app, Surface Duo users can get texts and notifications from their phone on their Windows PC, he noted. Users can also copy and paste content between their PC and the Surface Duo, he said.

Microsoft is also offering a Surface Duo for Business variant, which will be available through authorized Surface resellers.

“Surface Duo has protection built in at every layer with integrated hardware, firmware and software to keep your devices, identities, and data secure,” the company said.

Surface Duo can also be controlled with cloud-based device management through solutions including Microsoft Intune, and can work with Microsoft’s Windows Virtual Desktop solution, as well, the company said.

The Surface Duo will offer up to 15.5 hours of battery life on a charge and is powered by Qualcomm’s Snapdragon 855 Mobile Platform “optimized for the dual-screen experience,” Microsoft said.

The device also includes 6 GB of RAM and can be configured with 128 GB or 256 GB of internal storage.

The Surface Duo has a single-camera setup—an 11-megapixel f/2.0 camera—with modes for automatically adjusting to low light and scene detection, as well as offering up to 7X zoom.

The device weighs a little over a half-pound (0.55 of a pound) and measures 0.39 of an inch thick when closed.

Microsoft announced that pre-orders have begun for the Surface Duo, with the device set to ship on 10 September.

There is no word on Australian pricing so far and which telcos will be carrying the device.