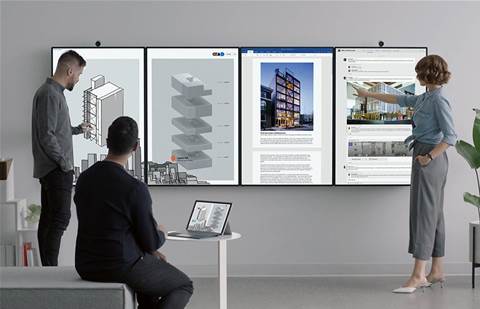 Microsoft is launching a preview of the Surface Hub 2 with enterprise customers and channel partners, with plans to debut the device in 2019.

The Redmond, Washington-based company said it has redesigned the second-generation Surface Hub to be lighter weight and more flexible, with the ability to rotate it horizontally and vertically.

The Surface Hub is an interactive conferencing and white-boarding display, which was made commercially available in early 2016 in 55-inch and 84-inch sizes.

The Surface Hub 2 will only be available in one size, 50.5 inches. However, the 3:2 aspect ratio of the Surface Hub 2 means that the usable screen space will be akin to that of the original 55-inch Surface Hub, according to Microsoft. The original model had a 16:9 aspect ratio, which led to lost screen real estate as a result of human ergonomics, said Robin Seiler, general manager of hardware engineering at Microsoft.

The Surface Hub 2 is built on Windows 10, and the operating system is being optimised for use on the large screen. That will enable options such as moving applications across multiple Surface Hub 2 units that are tiled on a wall.

Buying cycles can be lengthy for devices that require significant space in the office, so Microsoft is launching the preview now with plans for a launch at an unspecified time in 2019, the company said.

The amount of partner involvement with the Surface Hub 2 is expected to increase from the original version, which had a specialised partner base due to its requirements, such as the need for reinforced walls to install the 84-inch version, Seiler said. Dimension Data, Data#3, Insight, Ensyst and Generation-e were named as Surface Hub partners in Australia.

"One of the goals with the Surface Hub 2 is to be much more flexible – with a lightweight design for mobility and flexibility," Seiler said.

"We believe the current Surface Hub partner base continues to add a lot of value, including through consulting in space build-outs. But we also want to make sure other partners can get involved, because we want this to be so easy to purchase and install. It should be like installing a TV instead of installing conference room equipment."

Ultimately, "we do believe there will be more opportunities for partners" with the Surface Hub 2, Seiler said. "This preview allows us to start initial conversations both with enterprise customers and with channel. There will be some structured reach-outs to our channel."

The Surface Hub 2 can be wall mounted or used on a rolling cart, and will include 4K cameras along with far-field microphone arrays.

The device will feature a "greater than 4K display," though the specific screen resolution isn't being released. Other specs are also not being revealed yet, though it can be assumed the Surface Hub 2 will get a processor update from the original model; that model is powered by fourth-generation Intel Core processors, while Intel is now on the eighth generation.

Key features for the Surface Hub 2 include "dynamic collaboration," where two users can be logged into their accounts at the same time on the same device using its fingerprint reader. That enables use cases such as pulling in content from one user's cloud to add to another user's document, Seiler said.

The Surface Hub 2 has also been optimised for use with the Microsoft Teams collaboration app, she said. For video calls between Surface Hub 2 devices, users will be able to essentially stand in life size in front of each other – "as if they are in the same room," Seiler said – when the device is oriented vertically. "That changes the collaboration experience," she said.

Pricing will be "in line with competition," Seiler said, though the specific pricing isn't being released for now. Competing devices include the Cisco Webex Board and the Google Jamboard, which have starting prices of about US$5000. The 55-inch Surface Hub has been priced starting at A$13,499.

Telecommunications Services
By Kyle Alspach
May 16 2018
6:59AM