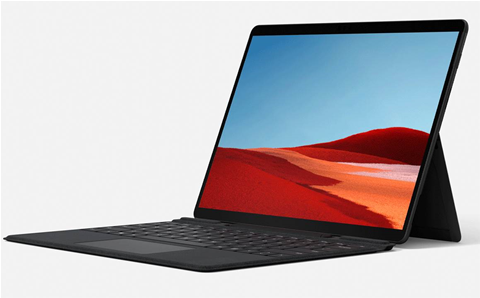 Microsoft on Wednesday unveiled a new form factor for its Surface Pro 2-in-1 line, the Surface Pro X, while offering the first details on a pair of forthcoming dual-screen Surface devices.

The devices will be a dual-screen tablet, the Surface Neo, along with a smaller foldable device, the Surface Duo, which can also serve as a phone. Both are slated for release in the holiday 2020 timeframe.

The company announced updated Surface devices including the Surface Pro 7 and Surface Laptop 3, as well.

While the last decade of personal computing was largely about "consumption"--web browsing, shopping, binging streaming video--"we believe that the next decade will be about creation and amplifying what we can do as humans," Microsoft CEO Satya Nadella said in remarks at the event.

The Surface Pro X introduces a new form factor to the Surface Pro line, with a 13-inch display in a 12-inch chassis and a thickness of just 53mm, Microsoft said. The new Surface Slim Pen is housed inside the top of the detachable Type Cover keyboard, and recharges while inside the Type Cover.

The Surface Pro X will be priced starting at $1699. Pre-orders begin today, and the device will be available on 5 November.

The Surface Neo will include dual 9-inch displays that can fold 360 degrees. The device will run a new version of Windows 10--Windows 10X--which is "designed and optimised for dual screen devices," Microsoft said.

The device can work with a pen and keyboard that both magnetically attach to the displays, Microsoft said. Each side will measure 55mm thick--with the Neo featuring the "thinnest LCD ever created," according to Microsoft--and the device will weigh just 0.65kg.

As for the Surface Duo, the device will run Android and can serve as a phone in addition to a smaller dual-screen tablet. The Duo features a pair of foldable 5.6-inch displays.

Meanwhile, Microsoft also introduced an update to its existing Surface Pro line with the Surface Pro 7. The 2-in-1 tablet will move up to 10th-generation Intel Core processors and will add USB-C connectivity for the first time.

The Surface Pro 7 will be priced starting at $1249. Pre-orders begin today, and the device will will be available on 22 October.

Additionally, Microsoft announced an update to its clamshell laptop with the Surface Laptop 3. The notebook will now come in a 15-inch size in addition to a 13.5-inch model. Processor options include a quad-core Intel "Ice Lake" processor (from Intel's 10th generation)--which makes it twice as fast as the Surface Laptop 2, Microsoft said--as well as an AMD Ryzen “Surface Edition” processor.

Other key features include a machined aluminum finish, a 20-percent larger trackpad and improved serviceability with a removable hard drive.

Grabbing the hybrid cloud opportunity with Lenovo and Azure Services
By Kyle Alspach
Oct 3 2019
6:56AM