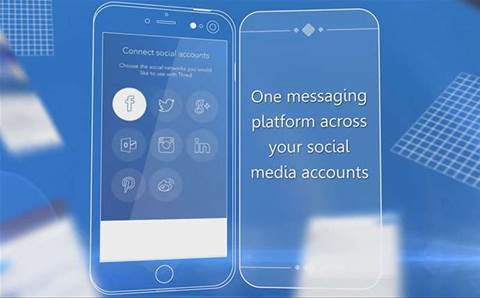 Social messaging application developer Thred has scored a place in Microsoft's BizSpark program, which gives the startup US$120,000 (A$160,000) worth of Azure credits along with promotion to the partner ecosystem.

The Thred application allows users to integrate multiple social networks, including Facebook, Twitter and LinkedIn. The company is headquartered in Hong Kong but is listed on the ASX following an April 2015 deal with Perth-based resources company Promesa.

"We are in discussions regarding integration with some of their larger existing customers – and it is this aspect along with their own product integration in the future that is incredibly valuable to Thred," he added.

He called BizSpark "a very good program" that "provides us with Azure platform credit as well as being a springboard for introducing us into the Microsoft network and ecosystem".

According to the startup, Microsoft has worked closely with its development team by using its Office 365 graph API to allow Thred's messaging platform to access Office 365 data, including Microsoft’s mail, calendars and contacts.

Whittaker said Thred was already getting recognised by Microsoft's clients. "A partnership such as this with Microsoft has an immediate impact of accelerating our growth and hastening our maturation cycle well beyond the level of organic growth."

The startup is initially planning a limited market release. The app is likely to be launched in New Zealand, Canada and other places "where we can get that all important market feedback – allowing us to iterate Thred before doing a full global launch" added Whittaker.