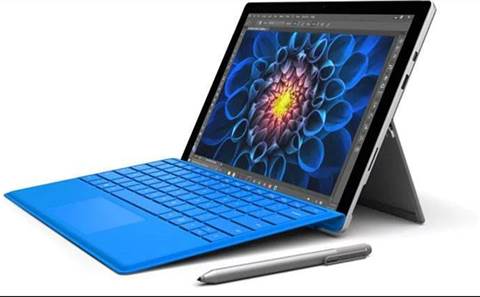 Microsoft has admitted to faults in a "small percentage" of Surface tablets and offered to replace devices affected by bothersome screen flickering.

The Redmond, Washington-based vendor will replace "eligible" Surface Pro 4 devices with the screen flicker problem, which is not the first issue faced by Microsoft's flagship productivity device.

The screen flicker fault is the latest setback for the Microsoft's device range, which have also included a battery drain problem in the Surface Book 2 announced in November, as well as last year's widely publicised failure of a reliability report,

Microsoft said it would replace flickering Surface Pro 4 tablets for free, at any time within three years of the device purchase date.

The Surface Pro 4 is the previous generation of Microsoft's productivity-focused tablet lineup, initially released in late 2015. The latest generation, simply known as the Surface Pro, came out last year.

"Creating the best products and experiences for our customers is our top priority," Microsoft said in a webpage for the replacement program.

"We have heard your feedback and after careful examination, have determined that a small percentage of Surface Pro 4 devices are exhibiting a screen flicker that cannot be addressed with a firmware or driver update."

Surface Pro 4 users who see a screen flicker must first install the latest Surface and Windows updates to ensure that this isn't the cause of the flickering, Microsoft said. If the issue continues, users must contact Microsoft support to begin the exchange process, the company said.

"Customers who have already paid an out-of-warranty fee to repair the screen flickering issue will be offered a refund and should contact Customer Support for validation," Microsoft said.

The acknowledgement of the screen flickering issue by Microsoft follows a Consumer Reports finding about Surface devices last August, in which the nonprofit product ratings organisation said it could no longer recommend Microsoft Surface products as a result of reliability issues.

Consumer Reports surveyed electronics owners and said it found that Surface devices, including the Surface Pro lineup and Surface Book laptop, are prone to more problems over time than competing products.