Minister: there was no cyber-attack on Census, data was untouched 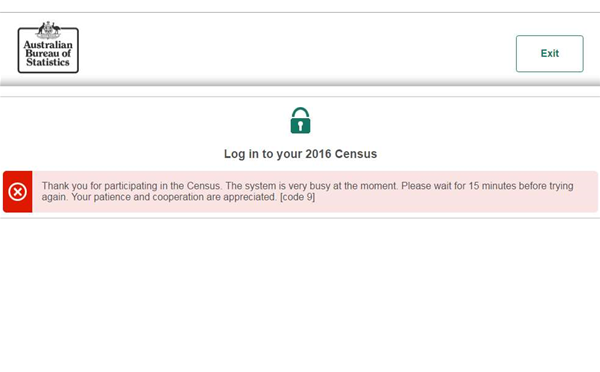 Last night's national Census ended in catastrophe after citizens were unable to access the website to complete the online form. Kalisch told the ABC this morning that the website was shut down after 7:30pm to ensure the integrity of the data, claiming it was hit by four denial-of-service (DOS) attacks.

Australian privacy commissioner Timothy Pilgrim on Wednesday morning announced the commencement of an investigation into the ABS to ensure no data had been compromised.

McCormack then fronted the media this morning with Kalisch, saying there was no attack or hack, and the data had not been compromised. The ABS received 2.3 million Census forms before the website was taken down.

The prime minister's cyber security adviser Alistair McGibbon said a "confluence of events" led to the website failure. This included ineffective geo-blocking, issues with the performance monitoring system and a router failure due to the high website traffic.

McGibbon said that the Australian Signals Directorate was investigating the source of the attack, but that most of the traffic came from the United States. Although the website was only supposed to be accessible from within Australia, the geo-blocking measures failed, according to Kalisch.

Despite the federal government warning Australians could risk fines for not completing the Census on time, McCormack said the deadline for completion was 23 September.

The government spent millions of dollars on outsourcing services and software licenses for the Census, including $9.6 million to IBM to host the eCensus, and more than $1 million across multiple contracts to Melbourne-based Revolution IT for load testing.

The Census website is still unavailable at the time of writing.