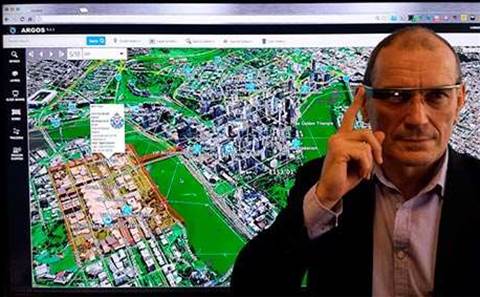 The Glass app for Dialog's ARGOS Emergency solution was demonstrated at the ANZ Disaster Management Conference on the Gold Coast last month.

It enables first responders to "access critical, live and collaborative operational data while allowing live video feeds from the incident commanders to be piped into the operations room".

Dialog's Google national practice manager, Glenn Irvine, told CRN that the Glass app was still in its infancy, but the geospatial technology behind it was well into pilot stage with a number of unnamed customers.

ARGOS is the banner name for a range of situational awareness solutions aimed at industries including emergency services, police and defence.

It provides users with a total operational view of events or operations in the organisation, from local to global initiatives, in real-time, on the familiar Google Geospatial platforms, or, as Irvine described it, like "Google Earth on a large screen in an operations room".

Irvine said some of Dialog's cutting-edge work felt like science fiction. "The first thing that comes to mind is Minority Report."

The ARGOS solution is built on top of the iSpatial framework, a web-based collaborative framework that leverages Google Earth and Maps, developed by US Google partner Thermopylae Sciences & Technology (T-Sciences).

T-Science's iSpatial has been in the field for a number of years, and was used in relief efforts for the 2010 Haiti earthquake and 2010 Gulf of Mexico oil spill.

Dialog has been working closely with T-Sciences for the past year or so. "They are the most success geospatial partner of Google in the US. We started talking to them at an early stage about  a year ago and started using some of their iSpatial framework for Google Earth."

With ARGOS, Dialog has developed a series of industry-specific applications based the Google platform and iSpatial framework and configured with icons and symbols targeting specific sectors, such as emergency services.

Dialog obtained two pairs of Glass under the Glass Explorers program, and Irvine said the app was just an extension of its ARGOS project and "very prototype".

However, he said that it was more than just a novelty. "The consumer side [of Glass] may be more of a fad, although I know people will go and buy them. I can see challenges from a consumer perspective but what I can really see are opportunities from a commercial perspective.

"Disaster management, emergency management – those types of use cases for Glass and wearables in general makes a powerful capability like iSpatial even more impactful."

According to a statement from Dialog, "Google Glass is the next step in augmented operations innovation, placing data in front of users who need to access it, hands free, in critical situations.

"With ARGOS Emergency, agencies can layer their data on top of Google’s base map and create their own maps and geospatial applications that can be used by their frontline and operations staff, anytime, anywhere. Operators can rely on maps that are comprehensive, easy-to-use and always relevant."

The 1000-staff company bills itself as the largest Google Enterprise Partner in Australia.