Mother, daughter share generational perspectives of working in the channel 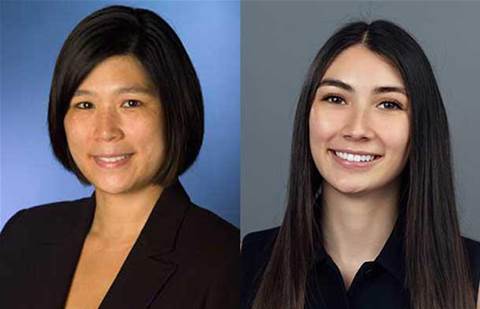 It’s safe to say that the Grothjan family is no stranger to the indirect side of the house. Aruba Networks’ global channel chief Donna Grothjan and her daughter, Katie Grothjan, digital marketing manager for Ingram Micro US, make a dynamic pair.

Donna spent her first 15 years in the workforce at Ingram too, and decided to be a channel “lifer.” It stands to reason that after listening to stories about emerging technology and the rapidly changing IT world, Katie also decided to start her career in the channel.

Being from two different generations, “Gen X” for Donna and “Gen Z” for Katie, the women are having very different experiences in IT – and that’s a good thing.

While a 'women of the channel' outing would have been a small group, or a “ladies night” for Donna when she started out, Katie is seeing an IT world that values equality and she does not feel like the only woman at the table.

Donna and Katie shared their experiences and vantage points as women of two generations in IT, their biggest barriers, and what they’d like to see change for an audience of women executives from vendor and solution provider organisations.

Here’s a transcript from an interview with the dynastic pair at a recent The Channel Company (CRN USA parent company) event.

What were the biggest barriers from when you first started as a woman in the channel compared to now?

Donna: Some of them are still the same. We think about high tech, how fast the market moves, and how many new companies are being developed every day – I think one of the things that still holds us back sometimes is this view of when opportunities presented themselves, we still feel like, if I can’t do that job 100 percent then I can’t apply for it.

When you think about the explosion of technology, if we’re not really willing to … pursue something that maybe you’re 50 percent qualified, there are a lot of others who are essentially willing to step up and take those positions.

I do think, in general, from a woman in channel's perspective, sometimes we’re not willing to go after that opportunity where we should, and we should be willing to take those chances. When you’re talking to your friends, there’s so much that you know about your job and [IT], and so it’s really just kind of going after that opportunity and feeling like: “You know what? Why not?”

Katie: From my perspective, it’s more like: “What barriers?” I obviously know the statistics, I know women face a lot of challenges in tech, but I was lucky enough to grow up with a strong leader as a mother who has taught me that if you assert yourself in the same way a man might in the business world, then you’re not going to experience these challenges. If you find a seat at the table, if you ask responsibility after that, and ask for that raise, you’re not going to experience those barriers.

What are the positive changes you’ve seen for women in the channel from when you started, to now?

Donna: I’ve been in the channel for [close to] 30 years and I think it’s women’s networking events where we have the opportunity to really learn from each other and learn things about ourselves. Thirty years ago, we’d call that a girl’s night out. We’d have drinks and conversations about the job and get to support each other.

I would say, from an industry perspective, I think what’s changed is, number one, it’s okay to be vulnerable — I think that probably one of the biggest things is you kind of felt early on that you couldn’t be vulnerable, that you needed to be driven, you needed to achieve, and you couldn’t really rely on a network of individuals – whether that network is a network of women or peers, or whoever you feel comfortable with, I do think that’s different. And I think this sense of feeling vulnerable, learning from each other, sharing – I think that is what’s different today that really supports the growth of the channel.

Katie: I feel like there is so much equality in the workplace for me. All the women I’ve met in tech, and at Ingram Micro that I’ve met and worked with have been so supportive.

Do you feel like you’ve been able to achieve a work/life balance?

For me personally, work/life balance has always been about choices. I think that’s one of the challenges and I’ll share that a lot of times there’s somebody at home that is probably taking care of the day-to-day business. My husband is a pilot. he travels, I travel. So, for us, in terms of how we managed it with our kids when they were young and still to this day, is we don’t have any set rules at home. It’s not my job to do this or his job to do that. If there’s dirty dishes in the sink, somebody just does the dishes. I think work/life balance comes from an acknowledgement that you can’t do it all and making those choices. I would say I have balance, for the moment.

Katie: I know my mom was stressed about having travelled for so much of my life, growing up, but I honestly am grateful for it because I think it’s had a huge influence on the independent person that I became today. I think my brother and I both have developed a figure-it-out, problem-solving personality.

I studied abroad in Madrid and having my mom travel all the time made me want to be globally competent. So, whenever you’re in a country where you don’t speak the same language as everyone, and the menu looks different, or you’ve never taken public transportation before, I wanted to be that person who figured out what metro line to take. It’s just little things here and there that I’ve noticed in myself that probably comes from having such an independent woman for mother, [which] definitely influenced me and my brother to both be independent people.

Do you have a mentor or mentors?

Donna: This is going to sound like a canned answer, but honestly, it’s not. First of all, yes, I have many mentors from my current generation and some that are older than me. For me personally, the way that I have built my network is I have a very trusted inner circle. I will call all of them my mentors, [or] my inner circle. And then, of course, you have a broader network, and the reason for that is because anytime I have any issue, challenge, new responsibility, whatever that is, I have the ability to call somebody up and say, 'I have no idea what I’m doing.' Or, 'I feel like an idiot today,' or, 'I was in this meeting and I answered this question and now I feel really stupid.' 'Tell me what you think and give me your opinion.'

Katie: Obviously, my mom and the wonderful people that she’s introduced me to [are mentors], but my group of friends influences me every single day. They’re all so different. You would think that you need similar people to have the same thought processes as you to go into these deep conversations but they’re actually very different and every time we go down the rabbit hole, it’s always a very healthy, productive conversation. They continue to inspire me every day.

What’s your advice for the other person’s generation?

Donna: I would say that what I have found different, especially being able to spend time with [Katie’s] friends and my son’s friends … [They are] all in. I think that is what I see in the millennials that we hire that work on our team and that we interact with. What I would say is: how do you take that motivation and that boldness, and be able to craft it into being able to influence? Because influencing is so important.

I think sometimes because you haven’t had the opportunity to live the decades and learn that experience, there’s this level of boldness. But at the same time, how do you really turn that into more influence? Because as you work for more companies, or the companies that you work for like Hewlett Packard Enterprise – it’s a large company – have, at any point in time, two bosses or three bosses, or you’re working at a mass cross-functional organisation, [so] you need to influence.

In my day, I was so shy, I thought 'Oh, the hierarchical structure is this,' and there were five levels above me, so I expected if there were discussions to happen in a room, the five levels above me would answer in this hierarchical structure, but that’s not really today. It’s so great to see how many millennials have an opinion and they put it out there. But sometimes, to be honest, when they put it out there, I’m a little bit like: “Okay, I heard you, but I’m not sure that you’re taking everything into perspective.” So [it’s about] crafting that [boldness] and making it more intellectual, as opposed to just making a statement.

Katie: My biggest advice for Gen X working with Gen Z would be to retire the phrase: 'That’s the way we’ve always done it.' There are a lot of companies with really established brands, goals and visions, and I would just suggest that you should always be challenging that, even though they’ve been in place for so long.

Maybe just an example is company profiles on LinkedIn usually have very technical writing and a Gen Z might argue to bring in a lot more personality into your corporate channel even though it’s scary, but the person on the other side is still human. So just being open to challenging these [historical] ways.