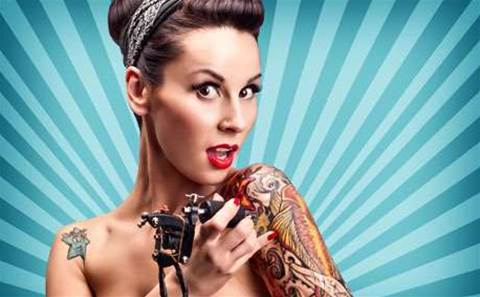 A Motorola Mobility patent application has proposed using an "electronic skin tattoo" as a smartphone microphone and wireless transceiver.

The temporary tattoo would also include a "power supply configured to receive energising signals from a personal area network", according to the filing with the US Patent and Trademark Office.

It would be applied to "a throat region of a body" - otherwise known as the neck.

The user would still need to use either headphones or the built-in receiver to listen to the incoming audio.

But Motorola thinks the technology would be ideal for noisy environments, such as large stadiums and busy streets, or in emergency situations.

"Communication can reasonably be improved and even enhanced with a method and system for reducing the acoustic noise in such environments and contexts," the filing read.

The tattoo would pick up acoustic sounds from the throat, convert the analogue signal into digital so the smartphone can process the information and provide the right output.

Motorola also proposed adding "a galvanic skin response detector to detect skin resistance of a user", which could have lie detector functionality.

"It is contemplated that a user that may be nervous or engaging in speaking falsehoods may exhibit different galvanic skin response than a more confident, truth telling individual."

This is not the first time Motorola has shown an interest in tattoos. Back in May, Regina Duncan, ex-DARPA head and lead for advanced research at the Google-owned phone maker, proposed using tattoos with near field communications as authentication tokens.

She also suggested a pill containing a switch and a battery could be swallowed by a user, whose stomach acids would work as an electrolyte to power the device. That would then create a signal, essentially turning your entire body into an authentication token, according to Duncan.