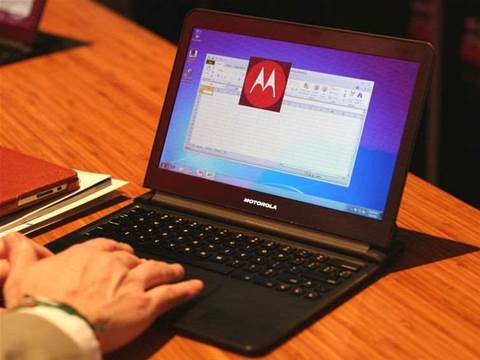 Motorola has released a new Android smartphone that comes with an optional dock that converts the device into a mini-laptop.

The Motorola Atrix 4G is a hugely powerful smartphone in its own right. The Nvidia Tegra-based smartphone boasts a dual-core processor (each core running at 1GHz), 1GB of RAM, and up to 48GB of storage (16GB built-in with the option to add an additional 32GB via the MicroSD card slot). It has a so-called qHD display offering a resolution of 960 x 540.

However, the smartphone really comes into its own when paired with the optional Motorola Laptop Dock. The smartphone slots into the back of the laptop chassis, behind the screen.

When docked, the Atrix's webtop app takes over the laptop's 11.6in screen, offering a full Firefox web browser and full-screen access to the Android apps stored on the smartphone.

A copy of the smartphone's display appears on the left-hand side of the screen, allowing you to look up a business in the Firefox browser and then dial it on the phone, for example.

Users with a Citrix account can even run a full Windows desktop session on the Laptop Dock, although it rather unceremoniously crashed in our brief tests on the CES showfloor.

The lightweight laptop dock weighs just over a kilogram and offers up to eight hours battery life, according to Motorola. The slightly cramped keyboard felt reasonably comfortable in our brief tests, although there's not a great deal of travel on the keys, and the unit tends to rattle a little on hard surfaces.

The Atrix 4G will be launching in the US in the first quarter, with worldwide availability coming later.