MWC: Sol faces off against Google and Skype 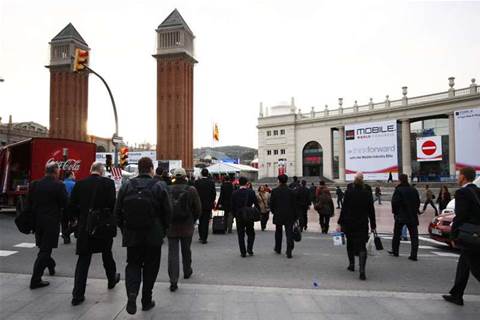 Trujillo has been omnipresent at the conference so far – with the GSMA promoting Telstra’s HSPA+ network speed achievements as an example to carriers the world over.

He has appeared at no less than two Telstra press conferences, a video endorsement during Microsoft’s launch of Windows Mobile 6.5 and today, at the first of two keynotes.

He began his presentation boasting about his achievements at Telstra.

“We started making big bets literally the day I arrived there,” he said.

“We have now taken our network up to 21Mbps – by the end of this year I intend to take it to 42Mbps.”

Trujillo said 54 percent of his mobile customers are now on 3G, with data accounting for 36 per cent of mobile revenues.

But Trujillo was soon on the back foot as Skype’s Silverman and Google’s Gundotra took Telstra to task over its closed business model.

Gundotra described how flat data plans or reductions in data tariffs -- neither of which Telstra offer --  had resulted in huge peaks in data use for carriers such as small American mobile telco MetroPCS and giant China Mobile.

Silverman, meanwhile talked about how technologies like VoIP were disrupting the industry – with Skype now responsible for eight per cent of international call volumes.

Silverman said that it is applications, and not high speeds, that promote data consumption.

The browser-focused iPhone, which offers users the choice of which applications they use, has “changed the game” for mobile data, he said.

Apple iPhone users make 50 times more Google searches than on any other mobile device and Apple boasts 500 million downloads from its App Store.

Almost four in five of 3 Skypephone users are new to the carrier),proving that disruptive technologies can still return profits, he said.

Asked if he would consider launching a Skype phone, Trujillo said he found the Skype presentation “amusing”.

“From what I recall, [Hutchison 3] rarely reports growth in profits regularly at all.”

“I have a responsibility to make money,” he said, to applause.

Silverman replied that price per minute in voice has been falling steadily for decades, while the number of minutes explode. Voice, he argued, was now a commodity in which carriers should not attempt to profit.

“Your company earns 35 per cent of mobile revenues from data – that’s a credit to you,” he told Trujillo on stage. “To us, voice communications is just more bits and bytes passing over your network.”

Both Google and Skype argued that mobile data pricing should be transparent. Silverman argued that consumers find it difficult to tell how much data they are using.

“Every time I hit a web page, it shouldn’t be a guessing game as to how much it costs,” Gundotra agreed.

“So what you’re saying,” replied Trujillo, “is that because I don’t know if I’m using one gallon or two gallons as I drive my car, I just give up and refuse to drive?”

“Words like free and flat break business models,” he said to Gundotra. “You say a flat rate is the easiest thing for the customer to understand.

"Flat rates are nice for a while – but when people talk to me about flat rates, I say, lets take a trip down the strip at Las Vegas and check out the all-you-can-eat buffets. Lets drive down the strip a year later, and you’ll find that the names are different on the front of the store.”

“We can’t afford all-you-can eat plans and continue to invest in infrastructure,” he argued.

“At the end of the day you have to make sure your revenues are commensurate with your investments.

“We have to find a way to create value so customers want to spend more. Because if they spend less, no one builds out the infrastructure.”

“I did spend 15 years at Microsoft – I have a deep understanding the power of a business model that makes money,” he said.

“It can act as a drug and stifle your ability to innovate.”