NBN Co is starting to make up for lost time in its fibre rollout to new housing estates, unveiling plans for a significant boost in new connection numbers by the federal election.

The company added 11,491 new premises to its latest rollout plan for new estates, of which it expects 8087 will be ready to carry retail internet services by the end of the year.

Of those 8087 premises, 4864 — or 60 percent — are expected to be serviceable come election time in September.

The significant new additions to the rollout plan go some way to countering NBN Co's recent admission that it won't meet its June targets in greenfields and brownfields areas.

Anatomy of a delay

An analysis of the latest greenfields figures by iTnews reveals the impact of that delay on the greenfields rollout plan, where the delays are worst, and how NBN Co is redoubling its efforts to get back on track. 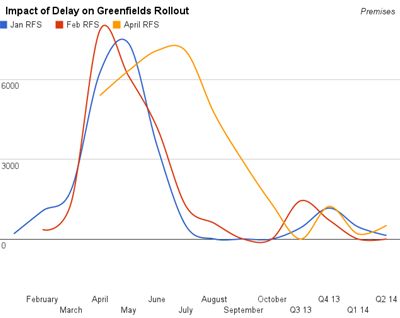 The above graph compares the expected ready for service dates of new housing estates from the January, February and April iterations of NBN Co's Ready For Service spreadsheets.

NBN Co did not publish a March iteration.

While the January and February rollout trajectories are fairly similar in shape, the April trajectory is flatter, reaching less premises in the months to June, before making up some of the shortfall by August or September.

The full April scorecard for greenfields estates is:

As one might expect, slippage in the ready for service dates is more pronounced this month than in February, when the last set of data was released.

iTnews' run of the April figures found service-ready dates slipped in 33.8 percent  (n=311) of all land or multi-dwelling unit release stages in line for NBN fibre. In February, this figure was 28.3 percent (n=235).

In addition, only 19 percent (n=175) of estate stages are on track to meet assigned service-ready dates, compared to 38.4 percent of estates (n=319) in February.

And ﻿﻿﻿8.8 percent of stages listed in NBN Co's plan had service-ready dates fast-tracked in April, compared to 19 percent (n=158) in February.

The second half of the scorecard points to a far brighter future for greenfields estates, and is concrete proof that the "additional resources and effort" NBN Co is allocating to the greenfields effort is having an impact.

Many greenfields stages that sat on the rollout list without any indication of when they would be ready for service have now been given a timeframe.

In addition, a huge portion of new land release stages and multi-dwelling units have been added to the rollout schedule, many with service ready dates. A full rundown of these figures can be found on the next page.

Back in February, almost 50 percent of service ready schedule slippages occurred in estates in Queensland.

Although the same four states are broadly responsible for schedule slippages this month, the proportions are vastly different.

In percentage terms, Victoria tops the list in April — home to ﻿﻿31.5 percent of stages that slipped, followed by Queensland (30 percent).

Analysis of the points of interconnect (POIs) that support the slipped stages turns up a mixed bag: the biggest contributor is a Western Australian POI.

In some POIs, a large number of land release stages in a single estate development may be distorting the overall impression of schedule slippage in that area.

For example, 16 stages in Townsville had service ready schedules slip between February and April, but ten stages are in a single development, 'North Shore'.

Similarly for South Morang, of the 19 stages impacted by schedule slippage, five are in the 'Eucalypt' development, four are in 'Plenty River Estate' and four in 'Summerhill'.

Campbelltown, Geelong, Geraldton and ﻿Slacks Creek are impacted by the same phenomenon but to a far lesser extent (having three or four stages from a single development impacted).

Although 81 estate stages appear to have been fast-tracked when compared to the February Ready For Service plan, many are simply reverting to pre-February expectations. 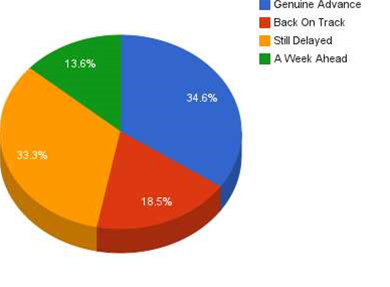 About 33.3 percent —or 27 stages — brought forward in April are still behind the service ready dates they held in January.

A further 18.5 percent — or 15 stages — could be considered 'back on track'. Effectively, they had service ready dates that slipped between January and February, but that have reverted to the original timeframe once more.

Read on for how NBN Co is recovering these slippage numbers with a burst of new additions to the rollout schedule.