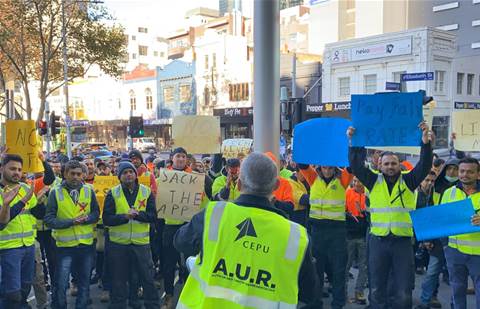 The Communications, Electrical and Plumbing Union of Australia (CEPU) and its NBN subcontractor-members reached an agreement with NBN Co delivery partner Lendlease to discuss the future of the network’s contracting model.

The union said Lendlease has agreed to “facilitate a genuine pathway” for NBN subcontractors to have direct engagement whenever the company secures a contract, bypassing prime contractors.

NBN subcontractors that are part of the CEPU have engaged in industrial action earlier this week to protest the reduction of their pay rates. The subcontractors agreed to walk off the job on Monday and marched to NBN Co's offices in Sydney, Melbourne and at the CommsDay Summit throughout the week.

With the Lendlease discussions, NBN subcontractors are encouraged to lodge their expressions of interest (EOI) to Lendlease, or have the previously lodged EOIs escalated.

The CEPU said it has also approached other delivery partners BSA and Visionstream, indicating that a similar approach may be secured, but have yet to hear from ASX-listed Service Stream.

“It’s time for Service Stream to agree to meet with the union to address their pyramid contracting arrangements – time is running out for them as protests are currently being planned at their locations,” the announcement read.

The union said these developments are “a massive step in the right direction”, and a first win for its NBN subcontractor members.

“The Union will continue to support [subcontractors] in this campaign to clean up the job dispatch debacle, for fairer rates, a complete end to the pyramid contracting model at all delivery partners and a Parliamentary Inquiry to properly investigate the many claims of corruption occurring within the industry,” the announcement read.

“Our calls for Parliamentary scrutiny have been heard by Shadow Communications Minister Michelle Rowland MP, who yesterday met with Sydney subbies and pledged Labor’s support for our fight.

“Workers deserve fairness, dignity and respect and the public deserves to know who’s nests have been feathered by the billions of taxpayer funds squandered on the NBN project – and we won’t stop in our push to ensure this occurs.”

Grabbing the hybrid cloud opportunity with Lenovo and Azure Services
By Nico Arboleda
May 7 2021
11:28AM