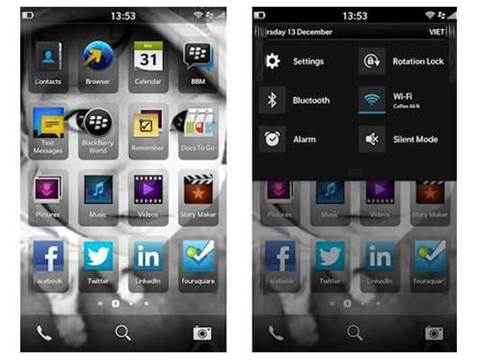 BB10 was finally outed today, after a lengthy wait that the company put down to finetuning the operating system.

The next-generation OS is not only a combination of BB6, 7 and the best of the QNX platform, but has been built from the ground up to create "a revolutionary mobile computing engine", as opposed to just another smartphone OS.

So what can we expect from RIM's new finger-friendly BB10  – and could it be the company's saviour?

It's obvious BB10 has undergone a radical transformation, which starts with cosmetic changes on the home screen. Taking a bit of a design cue from Windows Phone 7, the homescreen throws up four customisable widgets for quick access to features like music and pictures.

A new look interface also means a new approach to multitasking, with users able to flit between applications and menus with a simple swipe to reveal other apps running in the background.

Dragging your thumb from left to right allows you to browse through your open apps, while swiping back will take you to your previously launched programs. According to RIM, BB10 is all about glancing back and having everything running in real time, so everything "flows" across all applications.

The operating system focuses around the BlackBerry Hub, a one-stop shop for email, text messages, calendar and notifications. The 'peek' feature enables users to access notifications at any time.

The in-call screen has been subjected to a style change with a large picture of the caller sitting atop a selection of large buttoned options. There's a less noticeable option to make video calls in there too.

Within BBM there is now a video calling option and an ability to share your screen with others.

It's fair to say BlackBerry smartphones throw up an unrivalled QWERTY keyboard experience and the company is looking to do the same with its virtual one. Users can expect a new smart touch keyboard that is said to adapt to your touches and therefore offer a tailored keyboard experience.

Predictive text is also on the menu – as are gestures, which are set to play a major role in your typing experience. For example, swiping up reveals numbers and other characters, swiping up and down rotates the different keyboard layouts and in a similar style to Swiftkey, swiping left deletes entire words. You can flick suggested word into your copy, too.

How many times have you wished you could turn back time on some of your snaps? Thanks to BB10's TimeShift camera software, you can. Take a snap, select the part of the image you want to change and using the dedicated circular slider, cycle back through various frames to a point where you subject is smiling, for example, as opposed to having their eyes closed.

Other features include the ability to touch anywhere on the screen to take a photo and fast opening of the camera from the lock screen.

Crucial are the 70,000 apps BB10 will launch with – including Angry Birds, Facebook, Box and most other big names you'd expect.

Applications will be available in the company's newly-named BlackBerry World app store. Locally, applications on the platform include Event Cinemas, goCatch, Quickflix and Fairfax. Business users will get access to the likes of SAP, LinkedIn, Cisco WebX, FourSquare and WhatsApp.

The selling point for corporations, BlackBerry has retained its traditional Balance feature allowing business users to separate work from play. The Work space is encrypted and managed and secured by the user's workplace, protecting corporate data and applications.

New to BB10 is BlackBerry Enterprise Service 10 - one management console for businesses to manage the devices, users, groups, apps and services. It includes MDM for BB10 smartphones and the PlayBook tablet, as well as a separate BlackBerry World app store specifically for the Work profile.