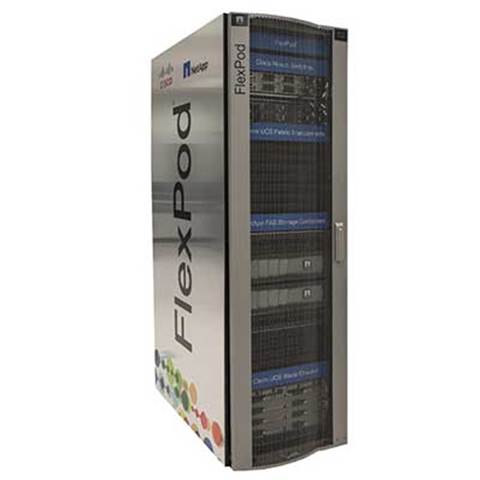 “FlexPod XCS was designed for hybrid clouds,” Arterbury told CRN. “It’s the first and only natively integrated converged infrastructure with the three major hyperscalers. We do it with tight and deep integration with Cisco Intersight.”

Arterbury said in the 11 years since the introduction of FlexPod, NetApp and Cisco have seen sales of over $16 billion to over 9,500 customers via 1,100 channel partners worldwide. The vendors have also offered over 200 validated designs based on FlexPod, he said.

“We want to evolve our business models to not only meet customer requirements but also help partners stay relevant to their customers,” he said.

FlexPod has been and continues to be a popular reference architecture for customers and gives NetApp a broader reach beyond storage and Cisco a way to take advantage of the storage market, said John Woodall, vice president of engineering and NetApp enablement at General Datatech, a Dallas-based solution provider and longtime channel partner of both vendors.

With the introduction of FlexPod XCS, like with any new FlexPod platform, one would expect upgraded NetApp storage fabric and Cisco UCS server technology, Woodall told CRN.

“But the key to understanding FlexPod XCS is the integration of Cisco Intersight for day zero and day one automation,” he said. “FlexPod is a reference architecture at its core. But both NetApp and Cisco have technologies that are reaching into the cloud. For instance, NetApp has Cloud Volumes Ontap for FlexPod. For modern DevOps, there’s Cisco support for IKS containers and Red Hat OpenShift, and NetApp supports Kubernetes. So we’re seeing a reference architecture designed to be extensible to the cloud.”

FlexPod XCS is very well suited to be offered on an as-a-service basis, which is important because over half the channel’s customers have a preference for the consumption model, Woodall said.

“FlexPod XCS fulfills that requirement,” he said. “Up to 85 percent of customers end up with hybrid cloud, multi-cloud infrastructures. And the as-a-service model is key. A customer may start on-premises but knows the future is on the cloud. But they may get to the cloud before they fully depreciate their existing infrastructure. FlexPod-as-a-Service lets customers deploy a known infrastructure now and then move to the cloud.”

The first is visibility, which is being handled with Cisco Intersight, he said.

“Before, a customer could support FlexPod as a storage target,” he said. “Now they can get visualization and full automation of their existing FlexPods and FlexPod XCS under Intersight,” he said. “They will know everything is up to date and compliant and get proactive monitoring even on existing FlexPods.”

The second is increased automation, which allows FlexPod XCS to be configured in a few clicks, Sivakumar said.

The third is hybrid cloud services, which FlexPod XCS offers in three primary use cases, including convenient leveraging of public clouds, application development in public clouds, and backup and recovery to on-premises and public cloud infrastructures, he said.

The fourth is a consumption model, which has been available for FlexPod but is now tied into the Cisco Plus and NetApp Keystone consumption-based pricing technologies, he said.

FlexPod XCS is slated to be generally available this summer. FlexPod-as-a-Service will be tightly integrated with Cisco Plus and NetApp Keystone soon after.