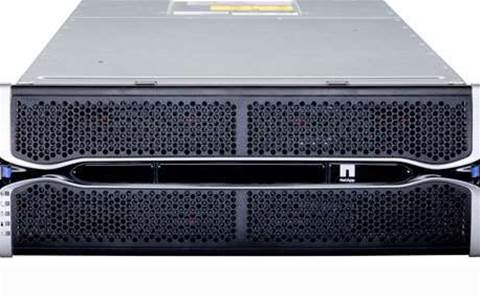 NetApp on Tuesday enhanced its E-series of performance SAN arrays with the addition of two new disk arrays and the second in its series of all-flash storage arrays.

New to the NetApp lineup is the EF550, an all-flash array featuring a sustained throughput of over 400,000 IOPS, a sub-millisecond response rate and over 12GB per second bandwidth, said Brendon Howe, vice president of solutions marketing for the vendor.

"The big difference between the EF550 and its competitors is that its performance numbers are sustained performance," Howe said. "If you add data protection, garbage collection, and so on, you get the same performance."

The EF550 comes with a base capacity of 19 TB in a 2U rack-mount form factor, and expands to nearly 100 TB with additional disk shelves.

The E550 is a follow-on to NetApp's first all-flash storage array, the EF540, Howe said.

NetApp has previously said the first products designed in the FlashRay family are expected to be available in beta by year-end, with general availability slated to start in the first quarter of 2014.

New is the E2700, a high-density storage array that fits 60 4-TB hard drives into a 4U package. The drives, which can be a mix of SAS, SATA and SSD, connect to a server infrastructure via Fibre Channel, SAS or iSCSI, NetApp's Howe said. It is slated to replace the company's existing E2600, he said.

Also new is the E5500, a high-performance storage solution that scales to up to 1.5 petabytes per system and offers five 9s, or 99.999-percent, availability, Howe said. It is slated to replace the E54000.

The E2600, E5400 and EF540 will eventually go end-of-life, a process that typically takes about six months, Howe said.

NetApp's Kunkle, who took over the channel reigns after the former channel chief, Todd Palmer, left the company in May, said the new E-series storage systems come shortly after the vendor reorganised how it manages its channels.

NetApp has in the last couple months reorganised its channel teams with more of a geographical focus, Kunkle said. "Before, NetApp spent years segmenting the market with sales teams calling on low-end markets, high-end markets and so on," she said. "So channel partners might be working with four to five sales teams from NetApp."

The company is also looking at partner profitability with plans to ensure they do well on the front-end benefits as well as with discounts, Kunkle said. The company also encourages its partners to handle the services part of the business as a way to ensure they get full control of a deal, she said.

NetApp is also looking at how to make it easier for solution providers to do business with the company, including implementing a single contract for the business relationship and streamlining the distribution channel to better handle volume orders, she said.