NetSuite teams with Accenture to chase the enterprise 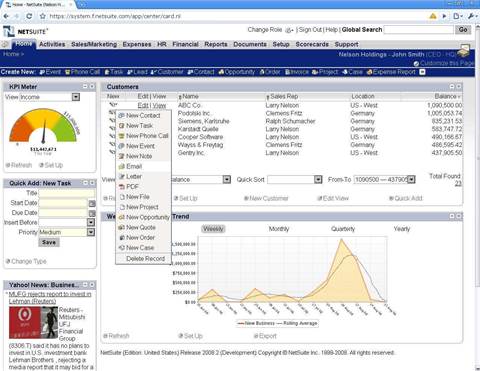 NetSuite has launched an enterprise financials service with unlimited users, modules, subsidiaries, storage and applications built on its SuiteCloud platform as it angles after big fish, SAP.

NetSuite Unlimited starts at about $A900,000 a year for 500 users, scaling in line with seats and modules selected and was aimed at global companies with subsidiaries, the enterprise resource planning vendor said at its annual conference in the US.

Zach Nelson, the vendor's chief executive officer, said NetSuite was a contender to the German software vendor SAP, which dominated the sector, for many enterprises.

NetSuite signed global consulting firm Accenture as a partner to chase the 50 biggest companies in the world and was hiring engineers and salesmen to beef out the partnership.

And NetSuite's Yammer-based social media platform was due before the end of the year to let users track changes to customer or product records.

NetSuite had deployed in wireless maker Qualcomm and group-buying site Groupon, the latter deploying the software in six countries in three weeks and which aimed to have 26 countries online in three months.

Disclosure: Sholto Macpherson travelled to SuiteWorld 2011 as a guest of NetSuite.

Eliminating departmental friction within MSPs
By Sholto Macpherson
May 11 2011
10:54AM