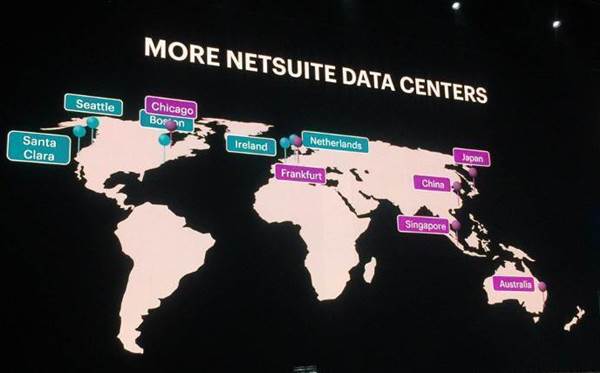 NetSuite has announced plans to launch four data centres in Asia-Pacific, including one in Australia.

The vendor did not give any clues as to when the data centre will be established, nor which city it will be built.

The new data centres are part of NetSuit's plans to grow its data centre facilities from 5 to 11 globally.

The company revealed its plans start with two data centres in Asia-Pacific, one in Australia and another in Singapore, which will be followed by two in Japan and China.

The company also plans to launch its fourth North American data centre to be located in Chicago. Apart from leveraging existing Oracle data centres in Europe and Asia, the vendor will also open a data centre in Frankfurt, Germany.

Oracle NetSuite Global Business Unit executive vice president Jim McGeever said: "Leveraging Oracle’s global scale, we are able to massively accelerate NetSuite’s vision of bringing a single unified suite to companies all over the world. Oracle’s technology infrastructure and global reach enables us to help ensure customer success no matter where they are located in the world."

McGeever was NetSuite's chief operating officer for six years prior to the cloud-based application vendor's acquisition in July 2016.

Oracle development centres located in India, China and Japan will be leveraged by Oracle NetSuite Global Business Unit. The vendor expects the centres to be able to accelerate the development of international, regional and local features and functionality within NetSuite OneWorld.

In March, CRN spoke to Oracle and NetSuite partners on the company's aggressive plans to grow local sales.

Red Rock, formerly known as UXC Red Rock, revealed it was creating a NetSuite practice in order to expand is service offerings.

Annaliese Kloe, chief executive of NetSuite partner Klugo Group, told CRN that Oracle was looking at "aggressively growing in Australia" because NetSuite has a strong presence in mid-market and they are looking at growing "substantially".

JCurve also revealed it was recruiting sales and service professionals to support its NetSuite customers.