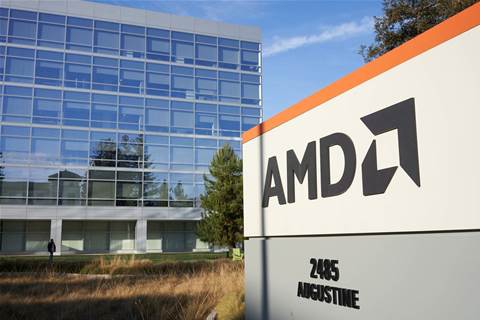 AMD has launched a new offensive against Intel in the integrated graphics arena with its new Ryzen 4000 G-Series and Pro Series APUs for desktop PCs, claiming that the new processors can provide two to three times faster graphical performance than its rival‘s chips.

Building off AMD‘s momentum with its Ryzen 4000 mobile processors for laptops, the new Ryzen 4000 G-Series and Pro Series processors are designed for pre-built OEM desktop systems, providing what the chipmaker called the “the most well-rounded package in processor design,” thanks to the processors‘ combination of its 7-nanometer Zen 2 architecture with Radeon integrated graphics.

The Ryzen 4000 G-Series consist of six SKUs from Ryzen 3 to Ryzen 7, with complementing Ryzen Pro models, and they feature up to 8 cores, 16 threads, a 4.4 GHz boost frequency, a 3.6 GHz base frequency, a 12 MB cache, eight graphics cores, a 2,100 MHz graphics frequency. AMD is also releasing three Athlon 3000 G-Series processors with complimenting Pro models, which come with up to 4 cores, a 3.9 GHz frequency and 6 MB cache.

For thermal design power, the processors are split between 65-watt and 35-watt variants, the latter of which have slightly lower performance but are better equipped for smaller form factor PCs. Unlike AMD‘s Ryzen 3000 desktop CPUs, the Ryzen 4000 G-Series does not support PCIe 4.0.

“No matter which way you slice it, we have a very powerful capable APU here,” he said, adding that AMD will release more competitive data as it becomes available. “But I would certainly expect that a 10th-gen [Core] versus [Ryzen] 4000 series would be a mighty fine comparison, as well, in our favor.”

Hallock said the Ryzen 4000 G-Series improves graphical performance by 60 percent and overall performance by as much as 2.5 times ­­­over its previous generation of APUs, and the big headlines are that users will be able to play games at 1080p with 30 or more frames per second depending on the game and see good performance for content creation and productivity applications.

“We can get them done with their work faster. We can finish their home movie faster. If they‘re dabbling in rendering or video encoding or any of the things that everyday consumers are starting to take on, because the tools are often free and widely available. we can make it a better experience for those people,” he said. “And that’s one of the reasons why we’re saying that these are the ultimate processors for pre-built PCs, because they’re just so well-rounded.”

In popular games like Grand Theft Auto V and Rocket League running in 1080p at low graphics settings, AMD said the flagship, eight-core Ryzen 7 4700G can improve frames per second over Intel‘s Core i7-9700 by anywhere from 99-274 percent.

With the enterprise-grade Ryzen Pro 4000G Series, AMD is adding a Ryzen 7 to the lineup, which previously only consisted of a Ryzen 3 and Ryzen 5 in the previous generation. The Ryzen 7 Pro 4750G, according to the company, provides 31 percent faster performance for “the most demanding workloads” and 43 percent more performance per watt than Intel‘s Core i7-9700 vPro.

Matthew Unangst, director of AMD‘s commercial client business, said the Ryzen Pro 4000G’s efficiency gains make the processors especially fitting for smaller PCs that are becoming more prominent in the market and can bring down the total cost of ownership for organizations.

“Increasingly, we‘re seeing that market shift to optimize small form-factor designs. They’re more compact, and they require great performance while in a much smaller, more dense environment. And that’s where this power efficiency really arms AMD well to continue to grow as this market adjusts over time,” he said.

Like the Ryzen Pro 4000 mobile processors introduced earlier this year for laptops, the Ryzen Pro 4000G APUs will include the new AMD Pro Technologies, which consist of AMD Pro Security, AMD Pro Manageability and AMD Pro Business Ready. Unangst said that the features and capabilities are competitive with Intel‘s vPro platform offerings.

“These deliver the features the capabilities and the peace of mind that our enterprise, large business and government customers expect when they buy a large set of desktops or notebooks for their businesses and for their organizations,” he said.

Jitesh Ubrani, a researcher at IDC, said while the average office worker doesn’t need discrete GPUs, power users could also turn to integrated graphics if the performance is right, which could save organizations money. But advancements in integrated graphics don’t typically result in increases in PC shipments or weigh heavily in buying decisions, he added.