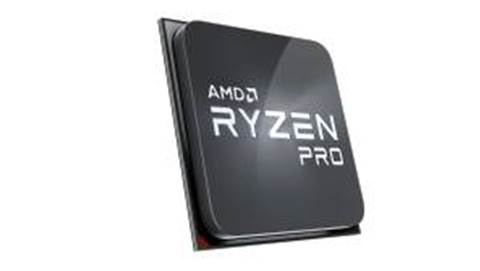 AMD is making its biggest play yet for Intel's dominance in commercial laptops with the launch of its new Ryzen Pro 4000 processors that come with new enterprise management and security features.

The company announced the launch of the four-core Ryzen 3 Pro 4450U, six-core Ryzen 5 Pro 4650U and eight-core Ryzen 7 Pro 4750U on Thursday, promising better performance, up to 20 hours or more of battery life and new manageability and security features that increase the competition for Intel's enterprise-level vPro processors.

The new 15-watt processors, which are designed for ultra-thin commercial laptops, are an extension of AMD's Ryzen 4000 family that launched earlier this year with the U-series for ultra-thin consumer and small business laptops and the H-series for gaming laptops. They are based on the same 7-nanometer Zen 2 architecture that has allowed AMD to claim big performance and efficiency gains over Intel in desktop PCs and servers, and those claims aren't stopping with the Ryzen Pro 4000 series.

"It's critical that our products and our platforms deliver the technology that helps our IT decision makers manage their business," he said in a briefing with journalists.

Between the Ryzen 4000 U-series for small- to medium-sized businesses and the Ryzen Pro 4000 series for enterprises, Unangst said AMD expects 70 or more commercial laptops to come out this year from OEMs, including HP Inc. and Lenovo. Lenovo's Ryzen Pro 4000 laptops include the ThinkPad T14 Gen 1, Lenovo ThinkPad X13 Gen 1 and ThinkPad L15 Gen 1.

In comparison with Intel's six-core Core i7-10710U, AMD claims that its flagship eight-core Ryzen 7 Pro 4750U provides anywhere from a 9-33 percent improvement in performance across several benchmarks, including in multi-threaded performance, while it dips by 2 percent for the single-threaded Cinebench 1T test, which Unangst said narrows the previous gap AMD had in that area.

However, he added, AMD's mid-range six-core Ryzen 5 Pro 4650U can compete with Intel's Core i7-10510U, offering anywhere from an 8-36 percent performance improvement across four benchmarks while showing 3 percent lower performance in the PCMark 10 Productivity test.

"What you can see here is that our Ryzen 5 part going head-to-head is highly competitive and in most of these cases actually delivers a leadership performance capability versus the Core i7," Unangst said. "This is really raising the bar on the expectations around performance."

The Ryzen 3, 5 and 7 Pro processors share some common specifications with their U-series counterparts. For instance, the Ryzen 7 Pro 4570U and Ryzen 7 4800U both have eight cores, 16 threads and a 12MB cache. However, for instance, the Ryzen 7 Pro has slightly lower clock speeds of up to 4.1GHz on the boost side and 1.7Ghz for base as well as seven graphics cores and a 1600Mhz graphics frequency. 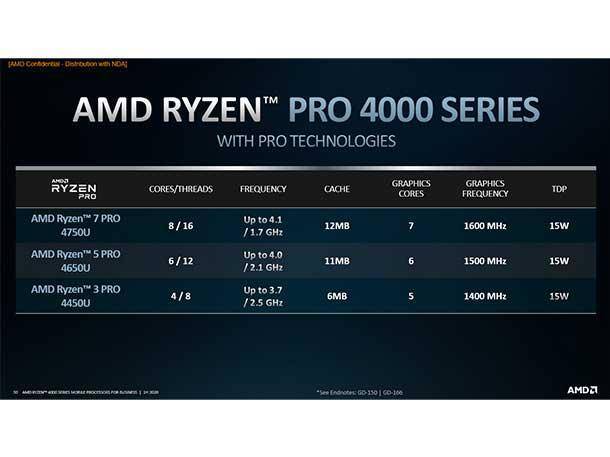 On top of the performance gains, AMD said it has doubled the relative performance-per-watt of its processors over the previous generation, which Unangst said will allow the Ryzen 7 Pro 4750U to offer up to 20 or more hours of battery life on premium laptop platforms.

These power efficiency gains are largely made possible by the Zen 2 architecture's use of a 7nm manufacturing process that shortens the distance between traitors on the processor, according to Unangst. Also contributing are improvements in design and instructions per clock.

Other power efficiency features include the ability to bring idle components to low power states and then bring them back to full performance faster. The new processors also reduce the efficiency penalty incurred when the laptop is transitioning through different power states.

Enterprise IT Management And Security Features

However, the bigger differences between the Ryzen Pro 4000 series and Ryzen 4000 U-series are the management, security and reliability features that Unangst said are built to address enterprise IT needs in the same way that Intel's vPro CPUs sport extra bells and whistles to support large organizations.

AMD refers to the new enterprise features as AMD Pro Technologies, which consist of AMD Pro Security, AMD Pro Manageability and AMD Pro Business Ready. Together, the new features and capabilities are competitive with Intel's vPro platform offerings, according to Unangst.

"AMD absolutely has the technology features and capabilities that go toe-to-toe with vPro in that part of the market," he said.

With AMD Pro Security, Unangst said the chipmaker has taken a "very deliberate, multi-layered approach to security" that includes AMD Memory Guard full memory encryption, which prevents information from being leaked from the system memory if the laptop is stolen. Unagnst said the feature comes with a small performance impact in the low single digits, but that the trade-off is worth it.

Other AMD Pro Security features include the secure co-processor built within Ryzen processors that acts as a root of trust, ensuring that only trusted software and firmware can run on the PC. The Ryzen Pro 4000 series also supports several Windows 10 security features, including Advanced Threat Protection, Enhanced Sign-On, Bitlocker, Device Guard and Secured-core PC. Supported OEM features include HP Sure Start and HP Sure Run as well as Lenovo ThinkShield and Lenovo Self-Healing BIOS.

"This can include tools like Intune and Autopilot and includes the capabilities to image a laptop, do remote provisioning, triage issues that customers may be having either remotely at home or while traveling, and monitor the PC fleet overall as well as to push security patches proactively when that needs to happen from an IT department," Unangst said.

With AMD Pro Business ready, the chipmaker is promising 18 months of planned software updates as well as 24 months of processor availability to ensure long-term reliability and performance.

"This is there to give our customers confidence that the products they're buying are enterprise-class, that AMD stands behind it with our engineering work, and the capability of the platforms," Unangst said.