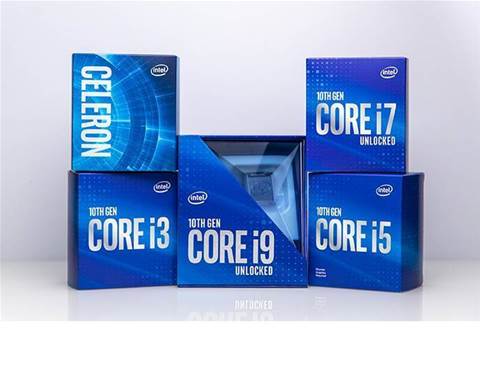 Intel has revealed its long-awaited 10th-generation Intel Core S-Series processors that pack up to 10 cores and 5.3GHz in clock speeds with improved tunability features for desktop PCs.

The company declared the lineup's flagship 10-core Core i9-10900K the "world's fastest gaming processor," beating rival AMD's 16-core Ryzen 9 3950X on the majority of the more than 25 games tested internally, though the chipmaker did not elaborate on the results.

Intel announced 32 processors in the new 14-nanometer lineup, code-named Comet Lake S, on Thursday, promising performance gains over the ninth-generation Core processors launched in 2018 that feature up to eight cores and 5GHz in turbo frequency.

The processors, which will be available starting in May, will require a new motherboard that supports the Intel 400 Series chipset.

Comparing to the previous generation eight-core i9-9900K, Intel said the new 10-core i9-10900K provides up to 18 percent faster 4K video editing. In terms of gaming performance, the processor provides up to 10 percent more frames per second for PlayerUnknown's Battlegrounds, up to 13 percent for Monster Hunter World and up to 33 percent for Mount & Blade II: Bannerlord.

As for how Intel's flagship processor compares to a three-year-old system running a seventh-generation i7-7700K, the company is promising up to 35 percent faster 4K video editing and up to two times faster for "megatasking." As for PC games, the gains in frames per second range from 37-81 percent.

"Frequency ends up being one of the fundamental capabilities of pushing those real-world use cases," he said.

While the highest core count of the new Intel Core lineup still falls short of AMD's 12-core and 16-core Ryzen 9 processors that launched last year, the processors eclipse the high end of AMD's boost frequency of 4.7GHz. Brandt emphasized the importance of high-frequency cores in games and most applications, saying that around 60 of games are optimized to run on a single core.

Based on Intel's internal research, according to Brandt, 95 percent of the systems connecting to Steam, the largest PC game marketplace, "are using a system with six cores or below.

"That's a very large install base of a relatively medium to low core count depending on how you want to define that," he said. "So the frequency on those critical six cores, those critical four, critical eight cores or whatever it might be is a huge factor in delivering performance."

To support greater flexibility in tuning the performance of the new processors, Intel has introduced new overclocking features such as the ability to enable and disable hyperthreading on individual cores and enhanced voltage/frequency curve controls to provide the "best overclocking experience."

"You can pick and choose what core count and thread count you want to operate at," Brandt said.

The processors also come with a refreshed Intel Extreme Tuning Utility that is meant to provide a visualization of how the system is operating, including when it's being tuned.

To improve the thermal performance of the processors from a silicon design standpoint, Intel decided to use a thinner die and a thicker copper integrated heat spreader than previous generations, which Brandt said allows less heat to get captured in the processor and improve overclocking capabilities as a result.

Among the other new features are Intel Turbo Boost Max Technology 3.0, which identifies the best performing cores to improve performance, as well as support for DDR4-2933 memory, hyperthreading for everything from the i3 to i9 SKUs and Intel Wi-Fi 6 AX201. the processors also support up to 40 platform PCIe 3.0 lanes, Thunderbolt 3 and Intel Optane memory.

The 32 SKUs in the new processor lineup consist of i9s, i7s, i5s, i3s, Pentiums and Celerons. Within that group, there are F-series processors that lack integrated graphics — a variant that was introduced last year to improve CPU supply — and K-series SKUs that come unlocked for overclocking purposes. There is also a T-series for processors across the stack with a much lower thermal design power of 35W.

To reach 5.3Ghz, Intel cautioned that the Intel Thermal Velocity Boost "is opportunistic at a temperature of 70 [degrees Celsius] or lower and when turbo power budget is available."

"The frequency gain and duration is dependent on the workload (best for bursty workloads), capabilities of the individual processor, and the processor cooling solution," the company said in the footnotes of a slide listing the new processors. "Frequencies may reduce over time and longer workloads may start at the max frequency but drop as processor temperature increases."

Marc Fertik, vice president of technology solutions at Ace Computers, an Elk Grove Village, Ill.-based system builder that sells Intel- and AMD-based solutions, said Intel has been "playing catch-up" with AMD as its rival ratcheted up the core counts of its processors to new highs and moved to a next-generation process technology while Intel continues to use 14nm.

"AMD is typically 20-25 percent cheaper in cost and typically 15-20 percent better in PassMark," said Fertik, who was not briefed on Intel's new CPUs. "So that's why we have a lot of customers that are willing to switch to AMD for higher-end desktop — because it's not a cost issue and they outperform."

As for whether the faster clock speeds of Intel's new processors will sway Ace Computers customers who are looking at AMD, Fertik said it will ultimately come down to benchmark performance.

"We get customers who are willing to make decisions based on PassMark," he said.

Fertik said the lack of PCIe 4.0 connectivity support in the new Intel processors puts the chipmaker at a disadvantage to AMD, whose third-generation Ryzen processors support PCIe 4.0, because the processors won't be able to support higher data throughput for high-end network cards.

"if you're shoving in a dual 10Gb or a dual 25Gb card in a desktop workstation, the performance may actually show a benefit since you're running it with PCIe 4.0 versus PCIe 3.0," he said.