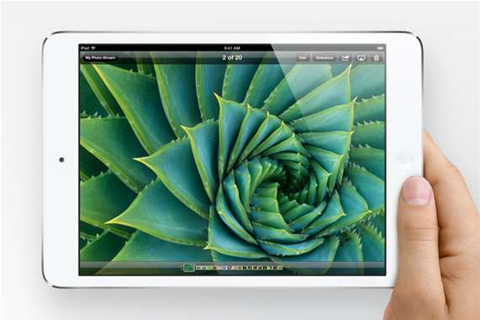 A second-generation iPad mini could be coming in a few months.

A recent report from NPD DisplaySearch forecasts a new iPad mini with Retina Display arriving some time in the third quarter. The iPad mini was launched last October as Apple looked to gain share in the smaller tablet market against competing devices like the Amazon Kindle Fire and the Google Nexus 7.

Richard Schim, senior analyst at NPD DisplaySearch, told CNet that along with the new iPad mini later this summer, he expects a new, fifth-generation iPad with an updated processor to arrive sometime in the first quarter of 2014.

Perhaps the most notable difference between the iPad and the iPad mini was the latter's display resolution -- the 8-inch iPad mini had a much lower resolution at 1,024×768 compared to the current iPad with Retina Display, which boasts a 2,048-×-1,536 resolution. The addition of Apple's Retina Display technology to the iPad mini could give the device a major boost.

The iPad mini's performance has become a source of controversy this week after Bloomberg reported Wednesday that Pegatron Electronics of Taiwan, which manufacturers Apple devices, has experienced declining demand for the iPad mini.

However, Pegatron CEO Jason Cheng later refuted the Bloomberg report, saying Pegatron doesn't release figures for specific products. Cheng also clarified his comments to Bloomberg, saying that almost every item his company manufactures, from tablets and ebooks to game consoles, was moving in a negative direction but that he never singled out the iPad mini.

Apple hasn't broken out specific sales figures for the iPad mini, but during the company's second-quarter earnings call last month, Apple reported a 65 percent year-over-year increase for the overall iPad product line, selling 19.5 million units in the quarter compared to 11.8 million units in the same period one year ago.

Apple executives also said during the earnings call that they were pleased with the iPad mini's performance. Apple CFO Peter Oppenheimer said the company was able to sell "significantly more" iPad minis in the March quarter than in the December quarter, in which Apple had troubled meeting the demand. Oppenheimer also said that Apple was able to expand the availability of the iPad mini in China, a growing market for the company.

While many Apple resellers have seen overwhelming demand for the iPad, the iPad mini may not be quite as popular. Mike Carper, CEO of Signature Mac, an Apple Authorized Reseller in Fort Wayne, Ind., said he's seen a definitive difference between the two form factors. "As far as the iPad mini goes, we have not seen that big of a demand," he said. "We sell more of the iPad 2 than the iPad mini."