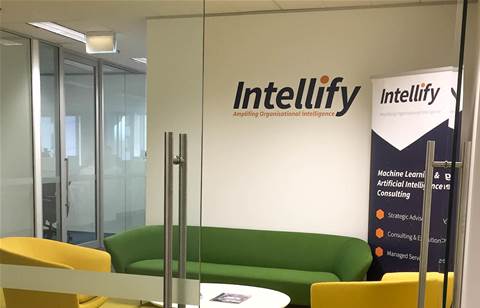 The Fast 50 member and AI/ML specialist provider delivers solutions for enterprise customers based on AWS and was named the AWS data, analytics and machine learning partner of the year in 2019. In the three years since it was founded, Intellify has experienced significant  growth, delivering projects for more than 100 customers across four countries.

Fairleigh explained that his new role was created in order to manage and continue this growth.

“Intellify hasn’t had a real sales function, which is typical of emerging tech companies, the CEO and the CTO were doing everything. Part of what attracted me to the role was the fact that they were able to do so much without that function. My expertise is uncovering what problems there might be, building out the sales process, increasing the focus on key accounts and delivering tangible results, freeing them up to focus on being able to curate those outcomes.”

With almost three years at Gartner on his C.V., Intellify was not the first company to approach Fairleigh, but they were the first to grab his interest due to their “palpable” passion for what they do.

He said that spark will be key as he builds out his sales team and added that he will ensure women play a key role, following the example set by the engineering team.

“Something that has frustrated me about companies in the past is that it's predominantly white males and that's not the way it should be. I'm thinking about where we can leverage the data science and engineering teams, the diversity we have there, and build out a sales team that looks the same. In the next six months, I will probably be hiring three to four, but we're going to be very picky because we want customer-obsessed people – otherwise you're just not going to get repeat business and it's not going to scale.”

Intellify’s focus on hiring women into skilled positions is certainly a good step toward gender equity although, for now, the major leadership roles are male-dominated.

While the company has completed projects for customers in the USA and Europe, Fairleigh said that there is no rush to expand fully into those regions just yet.

“The focus this year will be on expanding our physical presence across Australia and New Zealand to support customers closer to their time zone. Where a lot of service providers fall short is that they try to expand too quickly – you've got to ensure that from a sales perspective that the work is sustainable. I've helped with international expansion in the past so, without committing, we are going to expand internationally but we have to ensure that it's sustainable and we can deliver outcomes before making that sort of investment. But it's certainly on my mind.”

While Fairleigh hinted at some major developments to come, he said that this year is about making sure that the company doesn’t stall on growth.

“The focus this year is to grow revenue, the revenue will enable further hiring for more projects – I think we've hired nine data scientists and engineers in the last month. Now, it's about ensuring that those people can be put on projects which are right for them and to get the number of projects past what we have currently in the pipeline – that comes to me scaling the sales process.

“The ideal scenario is that in a year's time, we've executed on revenue goals, scaled out the sales process, and we have a way of delivering great customer experiences. And at the end of the year, we can evaluate: where should we go next? I'd love to be able to talk about some of the other things but it’s just a little bit too early. But in three months time, we’ll have some big announcements.”