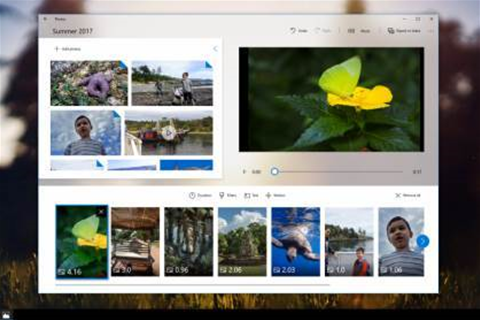 The next major update to Windows 10, codenamed Redstone 3, has been unveiled as the Fall Creators Update that will be introduced later this year, Microsoft revealed on day two at Microsoft Build 2017.

Its headline feature is Story Remix, a new app that'll let you easily stitch together images and video clips. The app is simple to use for the non-tech savvy individuals, yet is a powerful tool that works intelligently to create customised, interchangeable stories at the click of a few buttons. Thanks to its intelligent AI backend, the app is able to identify highlights and specific individuals to tailor a video for your needs. During the keynote, Microsoft demonstrated the ease of switching the focus from one football player to the next, creating two completely different video clips.

Windows 10 users will be able to annotate a video and even add effects with ease. The app is aimed at those who want to create a sharable clip to family and friends. The app will work across Windows, iOS and Android devices, allowing you to quickly synchronise photos and videos across multiple devices. Pen support also makes an appearance, for those who wish to annotate their videos.

There's also a much needed update coming to OneDrive. Microsoft will finally allow you to access OneDrive Files On-Demand. With the power of the cloud, you'll be able to view files without having to download them directly to your device. This is particularly useful for those who have large work folders, but don't want to clog up their machines at home or mobile phones.

This cross-platform integration will also be made possible for third-party apps, through the use of 'Project Rome', with Microsoft showing how developers can code their apps in a way that will allow users to seamlessly continue their experience across different devices. Those show up in a trio of features, Clipboard, Timeline, and Pick Up Where You Left Off.

Clipboard allows those using compatible apps to copy and paste across devices. For example, you'll be able to copy text on your Windows device and paste it on iOS through SwiftKey's keyboard.

Timeline cleverly recognises what apps and programs you were using on another device. Microsoft showed how someone could be working in Microsoft PowerPoint on one device, and then move across to another, with AI assistant Cortana reminding you what document you were working on and exactly where you left off. This new features combines with the Pick Up Where You Left Off feature, which will intelligently figure out the exact location you were last at, allowing you to stop reading an article on your PC, then resume reading it in the same spot once you go on mobile.

Developers might like to know that Fluent Design, codenamed Project Neon, will also be part of the Fall Creators Update. Microsoft has already started converting its Metro apps to Fluent Design. This brings a more fluid, faster and more efficient app structure for developers, allowing them to easily work on the Windows operating system, while coding for different OSs, such as iOS and Android.

Microsoft reasserted its position on Windows 10S, stating the operating system has already seen strong interest from its enterprise customers, particularly those in the education sector.

Finally, some will be glad to know that iTunes, Ubuntu, openSUSE and Fedora are coming to the Windows 10 Store.