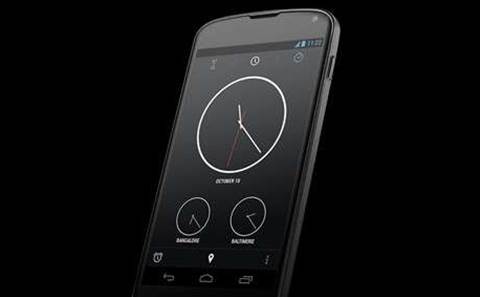 Details of what's expected to be the Google Nexus 5 have surfaced after an internal manual was posted online.

Leaked to Android Police, and removed at the request of Nexus manufacturer LG, the service manual reportedly details incremental updates to Google's phone, including a 32GB model and a faster processor. LG hasn't responded to a request for comment.

According to the manual, the new Nexus will look much the same as its predecessor. But it will feature a marginally bigger screen at 5in, with an improved 1080p resolution, up from the Nexus 4's 4.7in, 1,280 x 768 display.

Although the specs detail a 32GB model, there's no information on other storage options. The original Nexus 4 only came in 8GB or 16GB flavours. It will also boast 2GB of RAM and a 2,300mAh battery.

Other improvements include the addition of LTE on top of the usual 3G connectivity options, and Qualcomm's Snapdragon 800 chip.

The 8-megapixel rear-camera remains, as does the a 1.3-megapixel front-facing snapper. It isn't clear whether Google has made any improvements to the camera technology.

And like the original, there'll be NFC and Bluetooth compatibility, plus an array of sensors, a micro SIM slot and wireless charging.

The original Nexus 4 is no longer on sale through Google Play, suggesting the follow-up is due in the next few weeks.