Nokia 3310 revival is coming to Australia after all 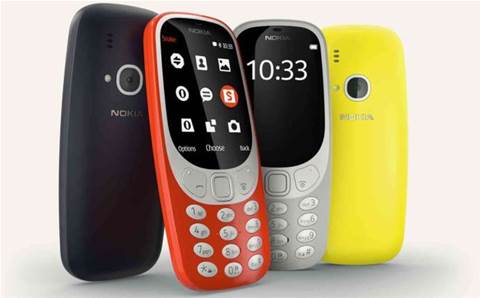 Australians will be able to get their hands on Nokia's retro revival phone after all, with the Nokia 3310 3G arriving mid-October.

Nokia's new parent company HMD Global announced it was reviving the iconic Nokia 3310, the classic handset originally released in 2000, predating the iPhone by seven years. However, the phones were announced to operate on 2.5G services, and with all three of Australia's network operators shutting off their 2G services this year, it looked like Australian's wouldn't get their hands on the phone.

At the time, a HMD spokesperson told CRN the phone would roll out to markets where a 2.5G device is in demand, but wouldn't share specific plans for Australia.

Nokia revealed yesterday that not only would it sell the Nokia 3310 in Australia, but it would be the first market in the world to launch the phone, which will retail for $89 and will be sold from JB Hi-Fi, Harvey Norman, Telstra and Vodafone, according to Gizmodo.

To connect the phones to mobile services, Nokia has updated the 3310 to work on 3G services. The new version of the 3310 features Nokia's Series 30+ operating system and a 2.4-inch polarised and curved screen, along with a 2MP camera and microSD support for 32GB of storage.

“Our reimagining of the Nokia 3310 has been a global and cultural phenomenon," said HMD chief product officer Juho Sarvikas.

"In a world dominated by smartphones, the mix of nostalgia and a beautiful phone that just keeps going has captured people’s imagination. Our fans around the world have been asking for this iconic phone to support 3G. Fans asked, we listened, and today welcome the Nokia 3310 3G.”