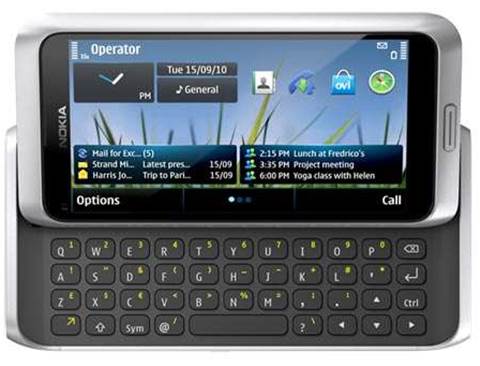 The march of the big-screen phones continues with the arrival of Nokia's E7 in Australia today.

Pitched as the "ultimate business phone", the Nokia E7 has a 4in AMOLED screen. This dwarfs not only many devices traditionally associated with business use, like the Blackberry, but is a bigger display than found on the iPhone 4 (3.5in), LG Optimus 7Q (3.5in) and HTC Desire Z (3.7in).

Screen size isn't everything, though it's not hard to see why Nokia has gone big in this case. In line with market trends, the E7 doesn't keep its bag of tricks confined to the office. You get an 8MP camera with dual LED flash, 720p video recording, free maps and turn by turn navigation, HDMI out for watching your photos and video on a TV, and Facebook, Twitter and Youtube integration. At $929, the E7 is available in "selected retailers" now, and from Vodafone and Optus in April.

With its big AMOLED screen, business credentials, slideout Qwerty screen and Symbian OS, the Nokia E7 certainly stands out from the competition. On paper it holds up well against the Desire Z and LG Optimus 7Q, which both have 5MP cameras. Screen resolution on the E7 is a relatively low 640x360, compared with 480x800 for the Desire Z and Optimus 7Q.

Something else to keep in mind is that when we reviewed the Nokia N8 - Nokia's first phone to use the Symbian ^3 OS - we were impressed with hardware, but not so much with the OS.

Nokia plans to bring out new phones (likely in 2012) running Windows Phone 7, which is currently expected to occur in 2012.

Eliminating departmental friction within MSPs
By William Maher
Mar 15 2011
8:48AM