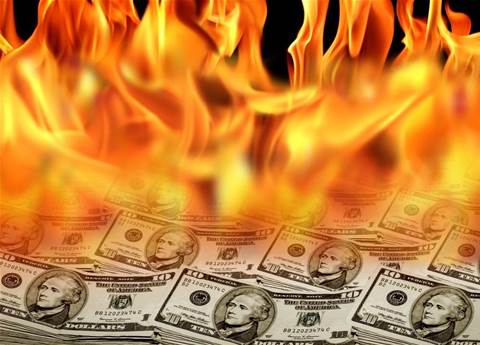 Nokia has burnt through €2.1 billion ($A2.7bn) of its cash reserves in the last 15 months as the former mobile giant continues to struggle against its smartphone rivals.

The company’s reserve currently sits at €4.9bn. Reuters reports analysts expect Nokia to spend a further €2bn in the next three quarters and possibly exhaust its entire reserves within the next year.

A Nokia spokesman told Reuters the company had a plan to improve cash flow.

"Nokia is implementing a decisive action plan to position our company for future growth and success," spokesman James Etheridge said. "The main focus of these actions is on lowering the company's costs, improving cash flow and maintaining a strong financial position."

Nokia posted a €1.6 billion ($A2bn) net loss for the last quarter, with its overall Q1 2012 sales results in line with earlier negative predictions.

The company has predicted similar results for its second quarter, thanks to “consumer demand related to new products”. Market leaders Apple and Samsung this year will release new versions of their flagship handsets.

The phone maker has in recent years struggled to keep up with its rivals in the competitive smartphone market. It last year unveiled the much-hyped Lumia line of handsets, a range it hopes will restore it to its previous glory.

Nokia sold over 2 million Lumia phones in Q1 for an average selling price of €220, a figure CEO Stephen Elop admitted was below expectations.

“We are navigating through a significant company transition in an industry environment that continues to evolve and shift quickly,” he said in a statement. “Over the last year we have made progress on our new strategy, but we have faced greater than expected competitive challenges."

Nokia has hinted at cost reduction and “significant structural actions” if its plan to combat financial and market share decline by expanding the Lumia’s reach worldwide is unsuccessful. It earlier this year announced a restructuring plan that will see 4000 jobs at three of its manufacturing sites eliminated.

The announcement did little to stir investors with Nokia’s share price closing steady at €2.23 last Friday.