Not again! Telstra suffers another outage 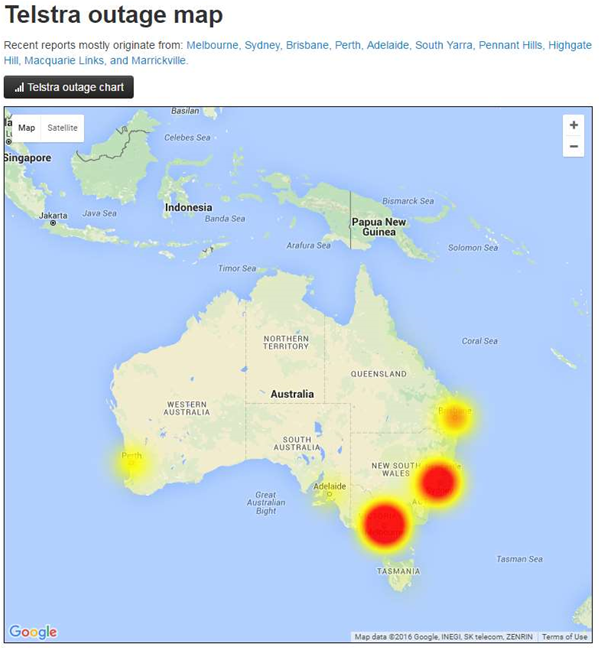 Telstra users suffered yet another outage Thursday afternoon, on the final day of the financial year - a critical time for business customers.

This time the problem reportedly affected its fixed lines service, with social media and Aussie Outages website showing a spike in business users complaining about telephone, broadband and network links not working.

The first reports trickled in on social media in the morning, before the majority of complaints poured in from about 2pm.

Jetstar staff were forced to process check-ins manually and with iPads while queues lengthened at Melbourne Airport, as the airline's IT systems suffered from the Telstra malfunction. Meanwhile, directory services company Sensis - formerly owned by the telco - reported that calls to its call centre were not possible due to the outage.

Other business customers such as ME Bank, Monash University and Reece Plumbing also reported problems with their Telstra services on Twitter.

Who says Twitter is dying? It's the place to learn about #telstraoutage when Telstra put you on hold forever. #telstra

(1/3) IMPORTANT NOTICE: Due to a Telstra outage, all in-bound calls to the Sensis call centre are unavailable.

A Telstra spokesperson confirmed the outage, saying: "We’re aware of an issue impacting some business and enterprise customers in Victoria. We are investigating the cause and working to restore services as soon as possible."

Although the spokesperson only referred to Victoria, Aussie Outage's complaints heat map (pictured above as at 3:55pm Thursday) showed up problems reported from Sydney, Melbourne and Brisbane.

At 9:56pm, Telstra announced that the problem had been fixed: "Business and enterprise services affected by today's disruption are back online. We're very sorry to all those impacted."

A spokesperson for the telco offered an explanation on Friday morning for the root cause of the disruption.

"We had a fault that overloaded traffic in part of our enterprise IP network in Victoria. The disruption affected some of our enterprise and business customers," said the spokesperson. "The network issue was restored at around 8.30pm, after which we worked with customers to confirm their services were up and running."

"We apologise to all affected customers and their customers for the impact that this has caused."

The latest outage comes just a day after chief execuitive Andy Penn allocated $250 million to fix the various problems that have plagued the telco this year.

@krisgesling Hi Kris, we are currently experiencing issues due to a Telstra Internet Outage. Sorry - we will keep you posted here. Bec

Oh c'mon @telstra! Another broadband outage in 3152! Any idea how long this time? Already moved one mobile to spread the risk!

We are experiencing temporary phone issues due to a statewide Telstra outage. Pls email us at council@stonnington.vic.gov.au to get in touch

On 9 February, human error was blamed for knocking out mobile voice and data networks then on 17 March a second national mobile service outage hit Telstra's 4G, 3G and 2G networks. Each incident resulted in the telco offering a 'free data day' as compensation.

The telco earmarked $50 million to improve monitoring and capacity after the first three incidents, well before Penn's $250 million promise yesterday.

Thank goodness we have a brilliant FTTH #NBN to cope with the #telstraoutage Oops, wait, what? #ausvotes