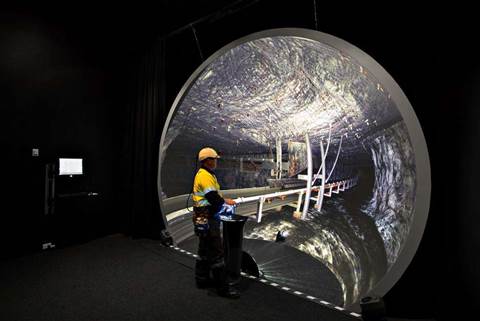 Newcastle Mines Rescue Station has upgraded its virtual reality mine safety training system to allow miners to experience potentially life-threatening scenarios in real-time and with the assistance of Apple iPod devices.

The station was the first of four Mines Rescue training centres across NSW to receive third-generation software created by Virtual Reality Technologies, a division of the station operators Coal Services.

The stations housed a 3D theatre, ten metres in diameter, with a 120-square-metres screen in a 360-degree configuration, allowing trainees to experience a "fully-immersive mine environment".

Between 15 and 20 trainees were in the virtual mine at any single time.

"Wherever you're standing and you turn you will see the mine environment as you would in a real mine," Coal Services' virtual reality technologies manager Bruce Dowsett told iTnews.

Dowsett said the third-generation of software that powered these theatres was a "step change in flexibility" for virtual training.

"Where our first and second generation [software has] very tightly scripted scenarios that are worked through with the trainees, the third generation allows for changes to be made by the trainers ... in real-time and in ongoing training," Dowsett said.

"Once the trainees have gone through a certain training topic, when they're coming back for refresher training there will be subtle changes [in the program] so they're not just seeing a repeat of their previous training."

Another key change in the third-generation package was the introduction of iPad and iPod devices into the virtual scenarios.

Trainers were equipped with iPads, from which they could track trainees in the virtual mine using GPS, and control and trigger events.

Trainees had iPod devices that replicated the tools they would be using in an emergency.

"We can replicate a multi-gas detector or a ventilation instrument [on the iPod]," Dowsett said.

"So, for example, a simulated gas detector will replicate [the unit] in the real environment. So [trainees] will have gas alarms, gas readings changing, as they're maneuvering in real-time through the virtual mine."

Dowsett said that "most" coal mining operations in NSW used one of the four Mines Rescue centres as part of their training regimes, as did contractors who supplied labour to mine sites in the state.

He said that sophistication of the virtual reality systems was needed to cater for the demand for skills that would materialise in the next five years.

"There's quite a lot of changeover of employment in the mining industry happening as we speak right through the next five years and beyond, bringing new people into the industry," Dowsett said.

"They need to be trained in a faster, more efficient manner. This achieves that result."

"While we would hope workers will never need to have to use these skills, or encounter mine accidents, it is reassuring to know that companies are investing in initiatives for the safety of Australian miners," Evans said.