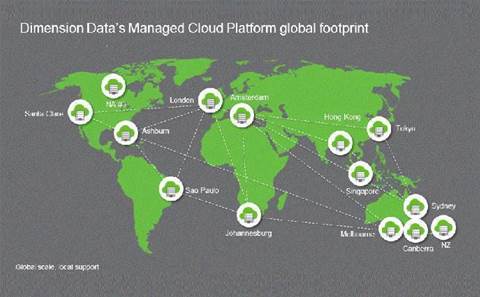 Dimension Data's global cloud business will be transferred to sister company NTT Communications, with hundreds of staff expected to be shifted over.

Some 370 people will be transferred as part of the restructure, which aims to make better use of the significant capital investment required to play in the highly competitive cloud sector.

The move to create a single "cloud powerhouse" will bring the two companies' separate infrastructure-as-a-service (IaaS) capabilities under one roof from March 2018.

The group will initially create a new whole company, Dimension Data Cloud Wholesale Services Inc, to house DiData's cloud assets and personnel. This new entity will then be transferred under the NTT Communications umbrella in a non-cash transaction.

NTT Communications will be responsible for service development and operation, and will serve as a wholesale provider of cloud services to sister companies Dimension Data and NTT Data, according to a translation of the address by Hiroo Unoura, president and chief executive, Nippon Telegraph & Telephone, at the company's half-year financial results presentation.

Dimension Data's cloud business has a strong Australian pedigree. The operation had been led out of Melbourne by Steve Nola from 2011 to late 2016, when Nola was appointed to a new role as Dimension Data Australia chief executive.

Australian hosting provider Bluefire was one of Dimension Data's acquisitions in 2011 as it sought to expand into cloud services.

After the transition, the team will report into Masaaki Moribayashi, senior vice-president of cloud services, NTT Communications, based in Japan.

The spokesperson said: "There will be no change or impact to any of the employees based in the Dimension Data Australian business."

Globally, Dimension Data is a US$8 billion company. Its Australian operations turn over more than A$1 billion in revenue and employ around 3000 staff. 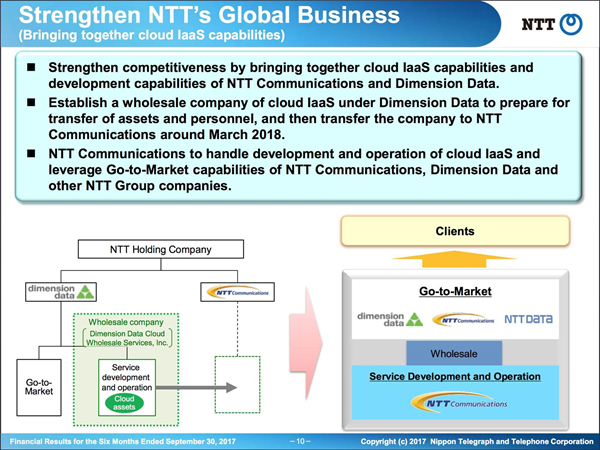 The cost to compete in cloud

"NTT Communication is spending about 10 billion yen [$A115 million] or more on development and Dimension Data about half this amount. By integrating and consolidating all this development, we will be able to have centralised and integrated development."

Unoura hoped that investing in creating a stronger product "will translate into increased sales".

NTT is prepared to increase its investment on cloud development if required, he added.

"In terms of the bottom line, right now cloud services require some investments in advance so it is not yet a major contributor to our profit but we hope soon it can also serve as a contributor to profit."

Many companies have struggled to keep up with the rate of investment required to compete in the cloud sector, which is dominated by market leader Amazon Web Services as well as Microsoft, Alibaba and Google.

These four companies, plus Rackspace, have almost 60 percent of the global cloud market, according to Gartner data.

Microsoft chief executive Satya Nadella has previously said companies would need to spend at least US$4-5 billion per year to compete in public cloud.

In 2016, Microsoft was set to spend US$15 billion on cloud computing data centres this year, up from US$8 billion last year, building new facilities on average at a rate of one per week.

Eliminating departmental friction within MSPs
By Steven Kiernan
Nov 13 2017
11:00AM