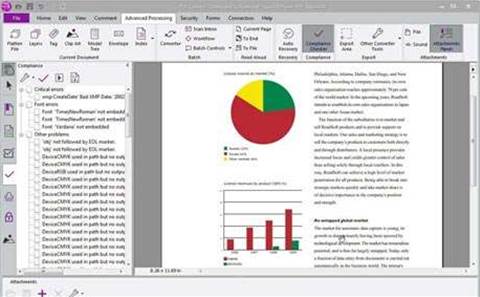 Add one to the list of lower-cost alternatives to Adobe's Acrobat Pro. Nuance Communications Wednesday unveiled Power PDF, a powerful Windows tool for creating and editing PDF files, forms and layouts, and for converting and securing files for use in other formats.

The CRN US Test Center received advanced access to Power PDF Advanced 1.0 and found a handsome, stable and capable application that behaved as advertised for less than half the cost of purchasing the equivalent feature set from Adobe.

"We started with the market opportunity," said Tom Varriale, director of channel development at Nuance, which specialises in voice-recognition software but also has been offering a PDF converter since 2003.

"There are millions of Adobe Acrobat seats, but for every one person with a licence there are two or three others that would also use it at a better price."

Such a dynamic, he said, gives rise to a common office refrain: Who's got the writer? "Often, we find that only a subset of [Acrobat] users have access. But movement of the price point opens the possibility of saving on that investment or extending it to more users."

To test Power PDF, we started by opening a series of long and complex PDF files to get a feel for how the app would perform. Power PDF took everything we could throw at it. It scrolled, searched and paged through documents with instantaneous responsiveness.

Even with documents containing multiple layers and other layouts attributed, the tool rendered everything flawlessly and kept true to the original layouts. Next we loaded a series of documents containing clock and calendar functions written in JavaScript. The tool performed all scripts correctly.

Other features include side-by-side document comparison, document commenting and review, and the ability to combine and assemble documents from a variety of PDF and non-PDF documents into a single cohesive new document with full tracking of source materials.

An advanced version also can perform batch file conversions and monitor folders for taking action beyond conversion to PDF. "This can be used for performing mass redaction and for compliance checking," said Jess Walker, Nuance's director of product management.

Power PDF can validate that documents conform to requirements such as the ISO's PDF A and Section 508 for accessibility to people with disabilities.

For larger installations, a volume licensing agreement permits network deployment without the need to key in serial numbers. A customisable installer permits companies to decide which parts of the application can be deployed.

"A customer can tell us what they want to deploy, or that they want to reduce the number of clicks needed to perform an install," said Walker. "We can get that down to one, or limit it to one or two choices."

This works, for example, if some people in an organization use SharePoint and some need a cloud connector for accessing files on Dropbox, or both. "Or users in legal might require a choice that accounts payable would not," she said, for example.

"Large organisations can use a customisation kit and control what gets installed. We've made it easy for IT departments to create an installation that works for their organisation."

There's also an upgrade path for people currently using Nuance's Power PDF Converter 8. Like most software the first time out of the gate, Power PDF might benefit from some interface polish and better font choices, but overall this is solid, enterprise-ready software.

Grabbing the hybrid cloud opportunity with Lenovo and Azure Services
By a Staff Writer
Apr 4 2014
6:12AM