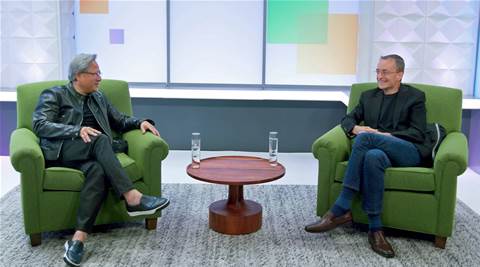 The companies did not say when VMware’s Project Monterey or the Nvidia NGC integration with VMware platforms would become available.

The announcement was made as Nvidia takes on Intel in pursuit of becoming the “world’s premier computing company,” which the chipmaker plans to achieve by acquiring British chip designer Arm for US$40 billion — a move that would allow it to expand beyond GPUs and interconnects into CPUs. It also builds off a partnership announced between VMware and Nvidia last year that allows users to run GPU-accelerated virtual machines for AI, high-performance computing and analytics workloads.

“Nvidia and VMware will help customers transform every enterprise data center into an accelerated AI supercomputer,” Nvidia CEO and co-founder Jensen Huang said in a statement. “Nvidia DPUs will give companies the ability to build secure, programmable, software-defined data centers that can accelerate all enterprise applications at exceptional value.”

The two companies said Nvidia NGC will accelerate the deployment and simplify the management of AI workloads for a variety of industries, from health care to manufacturing, in containers and virtual machines while allowing them to run alongside enterprise applications on VMware’s platforms.

“We are joining forces now to say, ‘hey, use this same platform and run your workloads,’ which essentially means that we can bring AI to every enterprise on top of the platform that they are already using,” Krish Prasad, senior vice president and general manager of VMware’s cloud platform business, said in a pre-briefing with journalists.

With the integration of Nvidia NGC, which stands for Nvidia GPU Cloud, users of vSphere, Tanzu and VMware Cloud Foundation will gain access to Nvidia’s containers, AI models and industry-specific software development kits that are optimized for its GPUs in cloud environments.

“As much as people may think of Nvidia as a hardware company, we are more so a software company today, and the reason is because we have spent a lot of energy on developing the algorithms for artificial intelligence that can be run on the GPU and take advantage of the GPU,” Manuvir Das, head of enterprise computing at Nvidia, said. “We have worked with the ecosystem to modify and tune existing AI algorithms so that they can run well on GPUs and really exploit the massive parallel computing power that GPUs make available. And in the process, we have built a large ecosystem.”

Combined with VMware’s Bitfusion solution, which enables GPU virtualization for AI workloads, the Nvidia NGC integration will also play well with the need for organizations to drive down hardware costs and use virtualization to simplify the deployment of high-performance applications for employees working remotely, according to DuBell. It’s a play that makes sense, especially right now, because of the coronavirus pandemic forcing many to work from home.

“Given the current world state, most of my customers are asking, ‘how do I do really powerful engineering without buying several thousand dollars’ worth of desktops and sending them out to people‘s homes?’ So being able to have that integrated service with VMware’s expertise and Bitfusion, to me, makes complete sense,” he said

As for VMware’s support for Nvidia’s SmartNIC data processing units, specifically the Nvidia BlueField-2, for its Project Monterey data center architecture, DuBell said such technology will become increasingly important as organizations need to better insights into network performance and resolve bottlenecks. That’s something he has encountered, for instance, in deploying multiple Nvidia DGX systems.

“I have a lot of clients buy one or two DGX-1s or [DGX-2s], and they did interesting, unique things with that when they really want to go to scale and hook up five, 10, 20 of them. That‘s where the network performance and insight became critical,” he said.