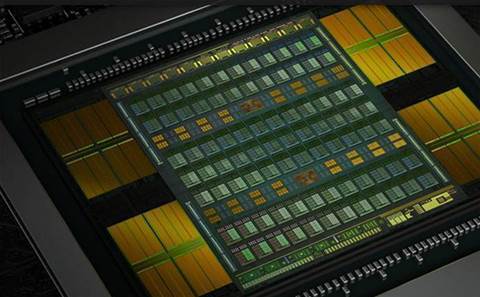 Nvidia shares hit a record on Friday, after it posted stellar quarterly results powered by higher demand for graphics chips used in gaming and data centres, and the rapid adoption of its new Volta chips for AI and driverless cars.

Shares of the chipmaker rose about 6 percent in morning trade on Friday – hitting a record of US$217.18.

Nvidia's gaming revenue in the latest quarter blew past Wall Street estimates but it was the data centre business, the driver of future growth, that made analysts stand up and take notice as revenue in the unit more than doubled.

Revenue from the data centre business, Nvidia's second-biggest revenue contributor, rose to US$501 million, beating analysts' estimate of US$474.2 million, according to Thomson Reuters I/B/E/S.

"Data centre results have been stronger than forecast and we underestimated the value the market would assign to this franchise," Nomura Instinet analyst Romit Shah wrote in a client note.

Shah raised his rating on the stock to "neutral" from "reduce".

The company, which gets the bulk of revenue from gaming where it supplies chips for gaming consoles, has seen explosive growth at its data centres operations.

Nvidia launched the Volta chips in May as part of its Tesla V100 data centre graphic processing unit (GPU) that will power systems from artificial intelligence (AI) to driverless cars.

"Volta's launch we suspect was a major catalyst for Intel to go back to the drawing board with its AI chip Nervana, the tactical need to use AMD GPU, and the hire of Raja Koduri to head Intel’s new graphics effort," said Rosenblatt Securities analyst Hans Mosesmann.

Early this week, chipmaker Intel partnered with bitter rival AMD for a graphics chip that will help the chipmakers take on Nvidia.

Nvidia's data centre business, which caters to clients such as Amazon Web Services and Microsoft Azure, was a point of concern after a disappointing showing last quarter.

But the Volta chip changed all that.

"The ramp of Volta seems to be tracking well, and more importantly, has significant runway ahead, in our view, as a broader set of customers adopt the new architecture in the coming quarters," Goldman Sachs analysts wrote in a client note.

The company claims that Volta will fuel breakthroughs in every industry and humanity's moonshots like eradicating cancer, intelligent customer experiences and self-driving vehicles.

Including Friday gains, Nvidia shares have soared more than 100 percent this year, making it a top percentage gainer on the Philadelphia SE Semiconductor index.

(Reporting by Supantha Mukherjee and Sonam Rai in Bengaluru; Editing by Bernard Orr)

Cloud application revenue made easy
By Supantha Mukherjee
Nov 13 2017
6:35AM