Nvidia targets AI with "most powerful GPU ever made" 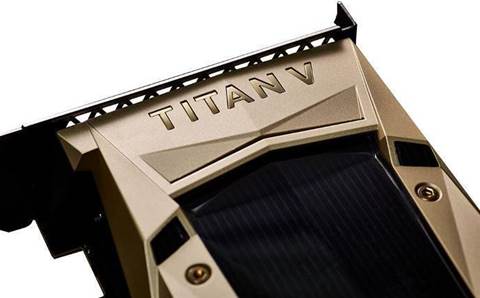 Nvidia is stepping up its game in the artificial intelligence market with its new Titan V GPU, which the company said is the “most powerful PC GPU ever created.”

Nvidia’s Titan V starts at a hefty US$2999 and is targeted at scientists and researchers who can use it for artificial intelligence and deep learning processing.

The GPU runs on Nvidia’s new Volta architecture, which is designed to work on both computations and calculations so that it can be targeted toward high-intensive computing tasks like artificial intelligence and simulation processing.

Nvidia said that Volta doubles the energy efficiency of the previous-generation Pascal architecture design so that customers are looking at a significant boost in performance.

The graphics card offers up to nine times the deep learning performance of its predecessor, the Titan Xp, according to Nvidia.

“With Titan V, we are putting Volta into the hands of researchers and scientists all over the world. I can’t wait to see their breakthrough discoveries,” said Nvidia CEO Jensen Huang in a statement.

“Our vision for Volta was to push the outer limits of high performance computing and AI. We broke new ground with its new processor architecture, instructions, numerical formats, memory architecture and processor links.”

The Titan V, which is available now, packs 21.1 billion transistors and touts up to 110 teraflops of performance, as well as 12 GB of HBM2 memory.

Nvidia is investing heavily in deep learning, which often requires the powerful and efficient parallel computing capabilities of GPUs to teach machines how to process text, voice and other types of data as part of artificial intelligence.

Other chip companies have been looking at AI as a potential market opportunity, including Intel, which has been working up to build out its own AI portfolio, punctuated by acquiring AI startup Nervana and developing the company's technology into an application-specific integrated circuit called Nervana Engine.

“Most chip companies want to get something out in the higher-end space, and this seems like a good play for the AI space where they’re competing,” said Kent Tibbils, vice president of marketing at ASI.

“I think AI will be a big market for Nvidia and Intel in the higher-end server and compute space … that’s a huge frontier that’s fueling growth and it’s all incremental.”