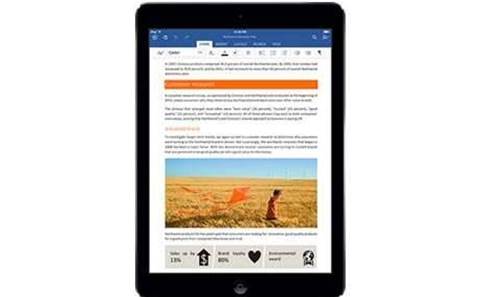 Microsoft has said its Office apps for iPad have been downloaded 12 million times in the week since they were launched.

The company last week launched iPad-specific versions of Word, Excel and PowerPoint, which have been riding high in the App Store charts ever since.

At the time of writing, Word, PowerPoint and Excel occupy the top three slots in the free app charts for the Australian store.

[Read our verdict on Office for iPad here]

Despite their undoubted popularity, the apps aren't being particularly well received by users, with none of the apps generating an average user rating greater than three stars out of five.

"Free" apps that have key features unlocked with in-app payments often tend to attract poor scores, and many of the user reviews are critical of Microsoft's decision to tie the apps to Office 365 subscriptions.

"Their obsession with only allowing these apps to work when combined with Office 365 is going to be the downfall of Microsoft," writes one user reviewer. "They are missing the obvious flexibility of being able to simply purchase the app or the whole office suite."

"If you have an Office 365 subscription this app is fantastic," writes another. "If you don't have one, you get a 500MB doc viewer."