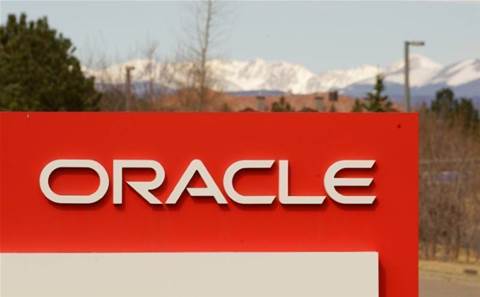 Oracle's forecast for current-quarter profit missed analysts' expectations on Tuesday, hurt by a strengthening US dollar, dampening its fourth-quarter earnings beat that was powered by growth in its cloud business.

Shares of the business software maker, which rose as much as 3.7 percent after the results, fell nearly 5 percent to US$44.10 in extended trade after the company's dismal forecast.

Oracle sees first-quarter adjusted earnings per share to be between 68 cents and 70 cents, below analysts' average estimate of 72 cents.

"In regard to Q1 guidance, exchange rates have moved from a 3 percent revenue tailwind to now being a 1 percent headwind from the last time I gave guidance," Oracle's head of investor relations Ken Bond said on the conference call.

Unlike previous quarters, the company did not give a break up of revenue from its cloud segments, which analysts say could have affected the company's stock price.

Morgan said all metrics in the fourth quarter were strong, but due to the disclosure change "investors are wondering if Oracle is trying to hide something in its total cloud revenue".

Oracle, which has cloud deals with AT&T and Bank of America, is a late entrant to the cloud business and has been trying to catch up with rivals such as Amazon.com, Microsoft and Salesforce.com.

Oracle Chairman Larry Ellison said some of the company's largest customers have now begun the process of moving their on-premise Oracle databases to the Oracle Cloud.

AT&T is moving thousands of databases and tens of thousands of terabytes of data into the Oracle Cloud, Ellison said.

Revenue from its cloud services and licenses support rose 8.2 percent to US$6.77 billion, as more companies shift to cloud computing from the traditional on-premise model to cut costs.

Analysts were expecting a profit of 94 cents per share and a revenue of US$11.19 billion, according to Thomson Reuters I/B/E/S.

(Reporting by Vibhuti Sharma in Bengaluru; Editing by Shailesh Kuber)