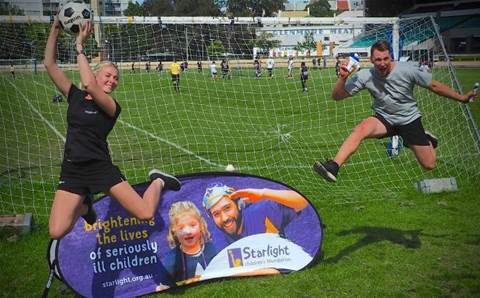 Participants of the 2016 Kick4Kids game

A number of Sydney-based IT companies will be participating in Kick4Kids, a soccer tournament which aims to raise funds for sick children across Australia.

“Kick4Kids has been a great experience for me personally and also VMtech as a whole,” said Ben Baines from the VMtech team. “The annual fundraising event brings the whole company together, not just the lucky few that get to participate on the day but also the fundraising we do as a business in the lead up to kick off.”

He said VMTech has entered a team in the competition for the last three years, and it has become an annual charity event for the company.

“Kick4Kids has always provided us with a great opportunity each year to give something back to the community and to help sick children by doing something fun that we love: playing football,” said Adrian Lloyd from the M Platform team.

Kick4Kids will have teams of six players taking part in a social round-robin style tournament to facilitate team building, networking with other companies and fundraising.

The tournament will take place on Friday, October 13, 2017 at Wentworth Park in Sydney. Team registration is $2495. Interested parties can register at the Kicks4Kids website.