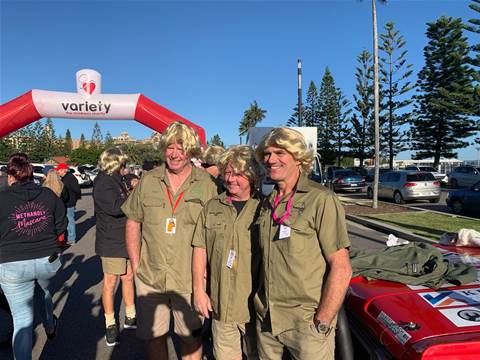 Sydney based distributor Orca Tech has helped raise more than $12000 for the 2021 Variety Club Bash, through its support for the L32 car piloted by the Steve Irwin team.

The security-focused distie was a major sponsor of the team which involved long-time friend of Orca Tech's boss, Craig Ashwood.

Two of the participants in the team are the owners of building companies (SAY Builders and TFH Constructions) who also provided significant sponsorship, along with a number of small businesses and individuals who donated.

Tim Hutchinson of TFH Constructions participated in the event for the first time this year, along with Scott York of SAY Builders, this was Scott’s tenth Bash.

Ashwood said Orca Tech was "keen to get involved with the team to help raise awareness of the fantastic work that Variety do for Indigenous and underprivileged children in remote areas of Australia".

"So many remote communities benefit from the fantastic work that Variety do and we wanted to be a part of it," he said.

The fundraising resulted in the delivery of $5000 worth of learning tools to Kelly's Plains Public School in Armidale NSW, which has just three teachers and 23 students.

"We will be involved again in 2021 and are currently planning out the extent of our involvement and how we can significantly boost the amount of money the team is able to raise," he said.

Grow your software revenue by selling these 5 affordable, essential tools for the modern workplace
By Chris Player
Jun 1 2021
9:39AM