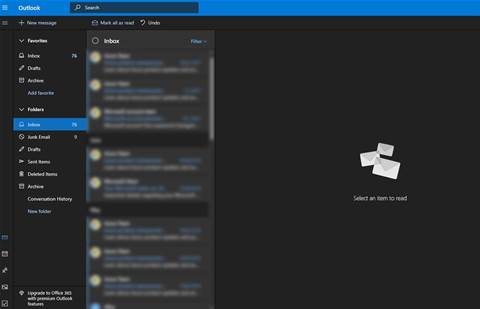 The feature, which inverts the colour scheme so that the background is black with text picked out in white, is designed to reduce eye strain and to make using the app in low-light conditions more pleasant. Many apps, including Twitter, Gmail and YouTube, have also adopted similar features.

Dark Mode is currently only available on the Outlook.com web app, and only available through the beta version, which can be easily enabled by toggling a switch at the top of the inbox. Dark Mode can also be toggled on and off in individual emails by clicking a button at the top of an email labelled 'turn on the lights'.

The news was revealed by an administrator in Microsoft's Outlook feedback forum, responding to a popularly-supported user request for the company to add the feature.

"When we designed Dark Mode, we debated having it exist in Outlook.com as a theme," the post read. "We quickly concluded that the way most people would expect themes to work and the way Dark Mode works were fundamentally different."

"Also, we imagine that there would be a dark experience for all available themes in the future, so having Dark Mode be a separate toggle would facilitate that. Plus, this is consistent with many other applications that have a dark mode."

The company has not confirmed when (or indeed if) the feature will be making its way to desktop and mobile versions of the Outlook client.