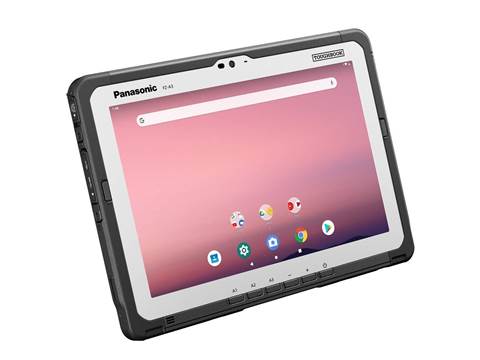 Panasonic is launching a new rugged Android tablet, the Toughbook A3, that seeks to expand the Android options available in the enterprise while standing out with its features around connectivity and configurability.

Panasonic, with North American headquarters in Newark, N.J., is also debuting a new suite of services, called “productivity+,” that can be leveraged by solution providers to help with serving customers.

The Toughbook A3 joins a growing lineup of Panasonic rugged Android devices for the enterprise, complementing the company’s portfolio of Windows rugged devices, said Dan Diliberti, head of mobility product management and market strategy at Panasonic.

"Within the last five years we have been developing a line of Android devices specifically to go after the opportunity where Windows CE devices are being replaced with new technologies. That's creating a really great opportunity for our partners," Diliberti said. "We have been leading the charge on introducing Android into the enterprise."

Panasonic, whose Toughbook sales are directed entirely through the channel, says it is seeking to work with partners to help transition customers to Android in industries such as warehousing, logistics, transportation, public safety and retail.

Along with introducing new hardware with the Toughbook A3, the company is also providing assistance with transitioning mission-critical applications to Android as part of its productivity+ services, said Jim Dempsey, director of the Edge Mobility Group at Panasonic.

"There are a lot of applications out there on Windows CE, and that's gone, and on Windows Mobile, which is gone. And customers are saying, 'I want to use this new [Android] interface and I need to get my app over,'" Dempsey said. "We have a rapid application tool, built into our software platform, that allows customers that ability. Typically it's a software engagement with them--if it's an in-house app, our teams will engage with them, and will port their app over from Windows CE to a modern Android platform to run on this new device."

Productivity+services that partners can leverage, meanwhile, include ProServices repairs for Toughbook devices--and Panasonic has expanded to a second ProServices facility, in Memphis, to serve as the primary center for Android device repairs, Dempsey said.

For the Toughbook A3 itself, key differentiators include support for both 4G LTE and for FirstNet, a wireless network from AT&T that is dedicated to first responder and public safety users.

The configurability of the A3 is also notable, with options to add a 1D/2D barcode scanner, an insertable smart card reader and a second USB-A port.

Other key features include a 10.1-inch display that is outdoor viewable with up to 800 nits of brightness; rain and glove touch functionality on the display; a dual hot swap battery design offering up to 15 hours of usage on a charge in total; and an eight-core Qualcomm processor offering a clock speed of up to 2.2GHz.

In terms of ruggedness, the Toughbook A3 has been designed to be able to withstand a drop of up to six feet, while the tablet also features IP65 water and dust resistance.