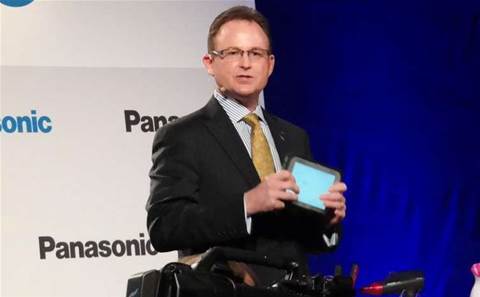 The Panasonic FZ-M1 had a tough introduction: a spokesperson threw the 7-inch Toughpad tablet from the stage during today’s press conference at CES.

As we’d expect from a product that’s part of Panasonic’s “Tough” range, it survived the violent demo - it's built to survive severe terrains, with IP65 certification showing its resistance to both dust and water.

The Toughpad FZ-M1 includes a 7-inch screen and runs on Windows 8.1, with a fanless Core i5 processor providing the power.

Designed for life outdoors, Panasonic claimed the display is readable under sunlight, while the touch display can cope with gloved fingers. Its resolution is a perfectly presentable 1,280 x 800.

The core specs include a 128GB SSD and 8GB of RAM, and eventually two processor options will be offered. The first version of the FZ-M1 is based on a Haswell Core i5 processor and will go on sale in spring 2014 with a quoted price of US$2,099 (A$2,342), with a Bay Trail Atom chip version due in summer. Australian pricing wasn't immediately available.

The arrival of the FZ-M1 means Panasonic’s Toughpad range stretches from 7-inch to 20-inch, with a rugged version of its 20-inch 4K tablet recently announced. No attempt was made to throw this across the room.