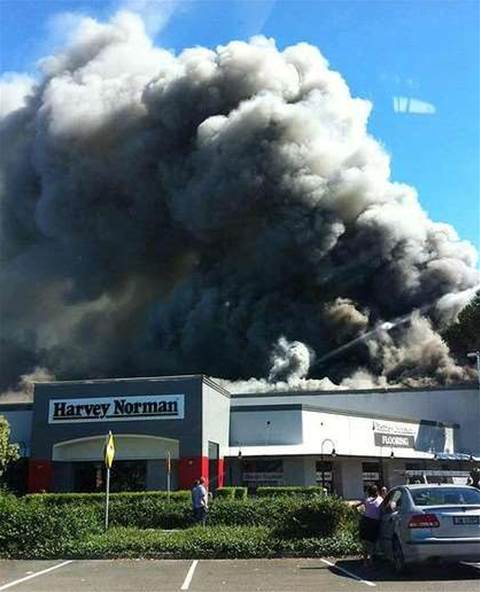 A fire that engulfed a Harvey Norman store in Penrith last Friday will cost the company between $8 million and $10 million, the retailer has revealed.

The Jamisontown store, on the corner of Mulgoa Road and Wolseley Street, went up in flames late Friday afternoon, with 120 firefighters and 30 trucks deployed to the scene. The fire was extinguished by 6:30pm Friday night but firecrews remained on scene until 3pm saturday putting out small fires.

The “fairly extensive” fire destroyed the rear section of the building, affecting the store's electronics, computer and whitegoods loading dock area and warehouse.

A firewall surrounding the showroom protected that section of the building, but Harvey Norman's head of computers Ben Macintosh told CRN it had suffered some smoke damage.

The retailer is yet to inspect the building. Structural damage will be assessed once the building is deemed safe for entry. Fire & Rescue NSW’s Ian Krimmer told CRN this take up to two weeks.

“We don’t think it’s quite as bad as we initially thought," Mactinosh said.

"The warehouse component is certainly extensively damaged, but all our buildings are built to code and there was a nice big firewall that stopped it from spreading to the showroom."

“It’s a major event but the entire store isn’t totalled.”

Macintosh expects the store to resume trading in two weeks. In the interim, Harvey Norman will trade from an adjacent Domayne store that holds a Harvey Norman seconds and clearance outlet.

All staff are back at work today and new stock has been secured from sister Sydney stores.

The cause of the fire is still unknown and is under investigation by police and the fire brigade.

“The most important thing for us is no-one gets injured,” he said. “I’m extremely happy no-one was hurt.”