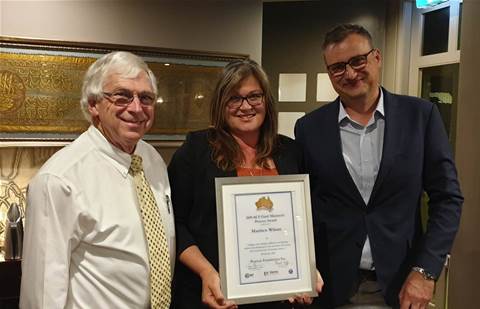 The chief executive of Tenable partner Penten Matthew Wilson has been honoured by the Pearcey Foundation for his work in cybersecurity.

Wilson was 2019’s recipient of the ACT Chief Minister’s Pearcey Entrepreneur Award, presented at the Pearcey Round Table 2019 event in Canberra.

The award, established in honor of Australian ICT pioneer Trevor Pearcey, recognises entrepreneurs for taking a risk, making a difference and inspiring others in the development of the Australian ICT industry. The foundation awards one winner for each state.

“This is a well-deserved award. Matthew is a serial entrepreneur, founding two successful companies with pioneering technology – Penten and M5 Networks both in networking and cybersecurity,” Pearcey Foundation ACT chair Brand Hoff said.

Based in Canberra, Penten specialises in cyber simulation and secure mobility services, with clients in defence and national security across Australia, the UK, Canada and New Zealand.

Prior to founding Penten in 2016, Wilson founded VoIP provider M5 Networks and cybersecurity business M5 Network Security in the early 2000s. The latter was acquired by Northrop Grumman in 2012 (with Wilson staying on until 2014), while the former was acquired by ShoreTel in 2015.

Including Wilson, the Pearcey Foundation so far has awarded three awards for 2019, with Australian Tenders founder and CEO Robert Nathan winning the award for Western Australia, while Mailguard chief Craig McDonald scored the award for Victoria.

The awards for Queensland and South Australia will be presented 15 and 30 October, respectively, while details of the Tasmania award will be released soon.

Eliminating departmental friction within MSPs
By Nico Arboleda
Oct 14 2019
7:00AM